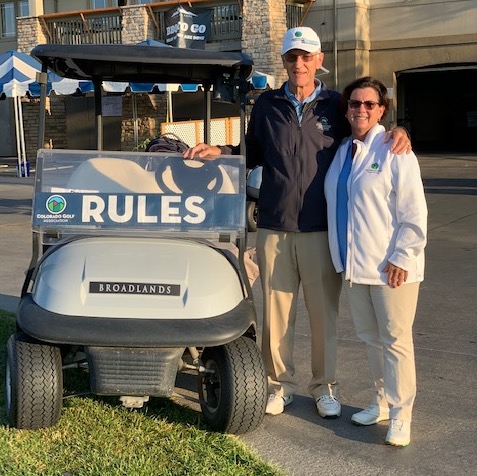 Peter and Susan Gilbert volunteered as rules officials for 34 tournament days during the 2020 season.

Peter and Susan Gilbert love traveling the world and have seen much of it. Peter, who was born in Cheshire in northwest England, spent 34 years serving in the Royal Air Force at bases spanning the globe, and Susan was an overseas educator in the Department of Defense for 21 years.

Between her work career and the travel she’s done, Susan has set foot on all seven continents. Peter has been to six — all but Australia — and more than 100 countries.

Just in March, as Covid-19 was hitting the fan, the two were on a cruise that took them around the Horn of South America, up the west coast of the continent, through the Panama Canal and on to Miami. This coming holiday season, the couple was planning another cruise — this one to Australia and New Zealand — though Covid has nixed that for the time being.

“Spending 21 years overseas — coming home only 8-10 weeks every summer — I traveled the world,” Susan said this week. “I just love it. I just love immersing in other cultures. It’s great.”

Added Peter: “Having traveled a lot in the military, you just carry on enjoying it.”

But as much as the Gilberts continue to enjoy traveling, there’s another interest to which they love devoting their time.

That would be golf.

“The worst day on the golf course is better than the best day doing anything else,” Susan noted.

And not only playing it — though they certainly get a kick out of their two or three rounds a week in the warmer months, many coming at The Links Golf Course in Highlands Ranch — but serving as rules officials at tournaments and other golf competitions.

In fact, the Lone Tree residents spent 34 days in 2020 both volunteering their time to help out at CGA and Junior Golf Alliance of Colorado championships and various qualifying tournaments. That’s more than any other rules official this year, so it should come as no surprise that the Gilberts have been named winners of the CGA’s Jim Topliff On-Course Rules Official of the Year Award.

The honor has been presented annually since 1995, and this marks just the second time it’s been given to a couple, the other being 2014 (Cope and Judy Bradford).

The Topliff Award — named for Jim Topliff, a longtime tournament director for the CGA who passed away in 2007 — is given to a volunteer rules official (or officials) who typically works quite a few days and makes an impression while conducting his or her duties.

Greg With, a prominent rules official and a past winner of the Topliff Award, serves on the CGA board of directors and chairs the CGA Rules Committee, which decides on the Topliff Award recipients. The honorees have demonstrated a commitment to the Rules of

Golf, working tournaments, positive interaction with players, and a variety of subjective elements.

“Susan and Peter worked more tournaments than any other rules official” in 2020, With said in an email. “Where they really excel is how they relate to players. They’re able to apply the rules with folks who are in trouble, demonstrate what to do without sounding instructional and have excellent knowledge of the Rules of Golf. This is an award that you don’t try to earn; it finds you based on the work you do. They are really deserving.”

Susan Gilbert just completed her sixth season as a rules official and Peter his fifth. This year, about half of the tournaments they worked were junior golf events.

“We love doing this,” Susan said. “It’s our way of giving back to golf and giving back to the kids. We just really love it, doing service and helping others. We’re honored to be selected for this award and acknowledged for the time and effort we put into it.

“It’s a great education. We learn something new every week.”

Peter and Susan, who soon will turn 72 and 67 respectively, are by no means strangers to following rules. After all, that comes with the territory in careers in the military and the Department of Defense. And though being a rules official is a little different, it’s turned out to be right up their alley.

“It’s the game of golf. If you’re going to play it, you should know the rules,” Susan said. “And we just love being out there helping.

“We like the educational aspect of it. If we’re helping someone, we always explain why the process is what it is and why the rule is what it is, instead of just saying, ‘You did that wrong. That’s a two-stroke penalty.’

“If we notice something happening — like a child getting ready to take a practice swing in the bunker — if we happen to be standing there, we might remind them, ‘Remember, you cannot touch the sand.’ We just try to explain things to them. We’re not a policeman. We’re there to help and educate.”

And the added benefit, from a personal standpoint, is they volunteer as a team. “If you get one, you get both,” Peter said with a chuckle, noting that neither he nor Susan works events separately.

Susan was the first of the two to venture into officiating — without ever having any intention of doing so. She was the captain of a nine-hole interclub league at Red Rocks Country Club, and it wasn’t unusual for women who competed to ask her rules questions. So when she saw a notice about a two-days rules course being offered, “I went to that course for my own education.

“By the end of the second day some of the guys who had been there for quite a while — Greg With, Michael Boster, Brad Wiesley, Mike Bureman — were all saying, ‘You really need to come out with us and do this.’ I’m like, ‘No, no, no, no, no, no.’ So then they started twisting my arm. And I went out out that next summer (to starting officiating).”

That first year, Peter would get up with Susan in the wee hours of the morning to see her off on days she was officiating.

“It was like, ‘This is silly. You’re going and spending the day on your own when I’m out doing this,’” Susan noted. “So the following year, he did (the rules class) and we’ve been doing it as a team ever since.”

The Gilberts emphasize their appreciation for the CGA and the Colorado PGA in paving the way for them to serve as they do. “Without their encouragement, education and support, we could not do the things we do as successfully or efficiently as we have.”

The result, combined with the Gilberts’ willingness to volunteer, often leads to them going above and beyond the call of duty.

“We enjoy going to any tournament,” Peter said. “We’ll do Drive Chip & Putt when that’s going on. If somebody calls us and says, ‘We’re really stuck this coming weekend (due to a shortage of officials). Is there any chance?’ If we are possibly available, we will turn out.”

“One of the things I never tire of is explaining nicely and gently and carefully to the youngsters about what the rule really is and why we have the rule and helping them understand how to take relief and things like that so that it’s easier for them next time,” Peter said.

“I quite like being able to stop somebody before they have a penalty. For example, one player had a particularly difficult bunker shot — the ball was plugged high up in a bunker — and he’s starting to build a stance. I stopped him and said, ‘You can’t do that. If you carry on, you will get a two-stroke penalty’ — rather than waiting until he had done that, then saying, ‘You have just gotten yourself a two-stroke penalty.’”

Part of the enjoyment in volunteering as rules officials is that the couple works together — at least sort of.

“We’re a team,” Susan said. “We are rarely ever together on the course, but it’s still something we’re sharing together. We go together in the morning, we come back in the evening. Sometimes we get to have lunch together, though it doesn’t happen very often.

“There have been situations — not a lot — where we’ve been the only two rules officials out there (for a tournament). So one’s on the front nine and one is on the back and we never see each other. But it’s nice on the way back — over dinner and everything — to talk about our day, the different situations we ran into, how we handled it. Even though we’re not together, it’s something we’re doing together.”

Though the Gilberts are now fixtures in Colorado, they met about 5,000 miles from the Centennial State — in Germany. Susan was teaching children of American military personnel at an Army base in her role as an educator for the Department of Defense Overseas Dependent Schools. And Peter was working for NATO about 20 miles away.

Over the years, both of their jobs took them all over the globe, but they came together in 2003 in Germany and married two years later, the year Peter retired as a Colonel. When Susan retired in 2008, they moved to Colorado, where she has family. In 2011, Peter earned dual citizenzenship.

The Gilberts definitely still enjoy globetrotting, but when they’re in Colorado during the warm-weather months, it’s a good bet you’ll find them on a golf course somewhere. And if they’re not playing themselves, it’s almost certain they’re eagerly lending a hand.