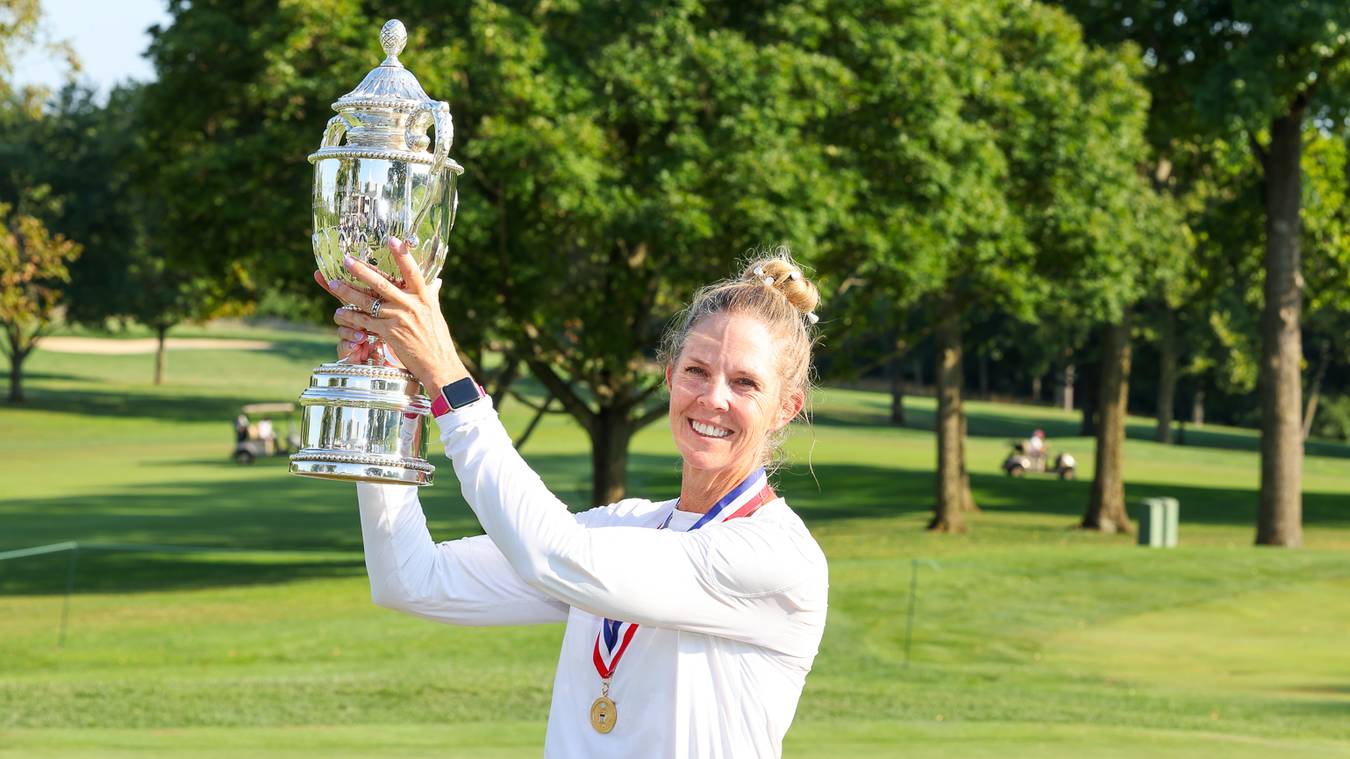 There’s something about USGA championships that brings out the best in Denver native Jill McGill.

And on Sunday, in her first U.S. Senior Women’s Open, a victory made it three USGA titles — but her first in 28 years. Among those she joins in capturing three different USGA championships are Jack Nicklaus, Tiger Woods, Arnold Palmer, Joanne Carner and Carol Semple Thompson.

“Heck, it must be the USGA,” McGill said at the awards ceremony. “These are the only events I win. (The victory) is a long time coming for a professional event, but I’ll take it. … I love the USGA. I’ve loved it ever since I got spanked in my very first Junior Girls by Brandie Burton.”

With Sunday’s victory, McGill became the first American to win the Senior Women’s Open, which was contested for the fourth time.

The Cherry Creek High School graduate, who now resides in Dallas, took advantage of a remarkably quick turnaround on the leaderboard to go from two behind to two ahead in a matter of minutes on the back nine at NCR Country Club in Kettering, Ohio. The 50-year-old went on to claim the Senior Women’s Open title by one over Leta Lindley.

In drinking a little celebratory champagne afterward, McGill noted with a smile, “I’m of age.”

McGill, who earned more than $2.3 million in a long LPGA Tour but never won a title there, shot an even-par 73 — matching Sunday’s low score — to post a 3-under-par 289 total. Among those she overcame for the victory were defending champion — and playing partner — Annika Sorenstam, Laura Davies, Juli Inkster and Helen Alfredsson.

Sunday’s victory gives McGill $180,000 and a berth in next year’s U.S. Women’s Open that Pebble Beach — a place she calls “heaven on earth” — will host.

McGill, who has the distinction of being the first individual champion (1990) at a sanctioned girls state high school championship in Colorado, made a 5-foot par save on No. 12 to remain two behind then-leader Davies, who hadn’t made a bogey in 39 consecutive holes.

But playing in the group behind, Davies recorded a quadruple-bogey 8 on the 12th, suddenly giving McGill a two-stroke lead. Davies, the 2018 USSWO champ, pulled her tee shot badly on 12. She tried to hook her second around a tree but hit it, with her ball bouncing out of bounds. Her fourth also hit the tree, but stayed in play. Davies didn’t get on the green on the par-4 until her sixth shot and she two-putted for a quad.

“It’s three weeks of walking with a hobble (due to a sore Achilles tendon), the pressure of a final round, and well, I was going really well until the quad,” Davies said.

From there, McGill did what she needed to do to remain in front, making birdies on 14 (3 feet) and 16 (two putt on a par-5) before bogeying 17 and 18 via three-putts. On the last, McGill was going to finish out her round with a final tap-in before Sorenstam had putted out. But the World Golf Hall of Famer reminded her to mark and wait as the prospective champion.

Said Sorenstam: “I wanted to give her a hug and say, ‘This is yours, so enjoy the moment, soak it in and let me finish.’”

One highlights of Sunday’s round that proved important for McGill was a chip-in birdie at No. 4, where the ball bounced off the pin and out of the hole for a moment, before falling fell back in.

The win was a family affair as McGill’s husband and kids flew in mid-tournament to be on hand, and her older sister Shelley O’Keefe, who battled ovarian cancer last year, caddied for her.

“We had an inside joke going the whole week that really made us giggle out there, and that was helpful, knowing what she went through and she’s still battling a little bit,” Jill said. “I don’t know what it’s like — I’ve never had chemo — so I don’t know what the aftereffects of that are. She was (in the) early stages, but anytime you have a scare like that, it certainly puts things into perspective and prioritizes things.”

As for her kids being present for this big moment, McGill said, “The most important thing to me is that I get to have them be out here with me and see me do something like this, and hopefully it inspires them, “

The fact that McGill overcame the pressure-packed final stretch to prevail was no small matter. Her daughter, Bella, helped in that regard, as did a tennis instructor who has spoken about the importance of being loose and relaxed.

“I surprised myself at how I was able to breathe through it and use some thoughts of just relaxing and telling myself the only thing I can do right now is relax and do the best I can,” McGill said.

“Bella has been reminding me of that all week. She says, ‘Mom, the best thing you can do is just do the best you can on every shot and take what you get. She was super helpful.’”

Ironically, McGill missed the cut in the Inspirato Colorado Women’s Open in June, where she posted scores of 80-68. Indeed, she noted that she hadn’t won a big-time golf event since her 1994 victory at the U.S. Publinks.

“It’s been a long time. It’s been a really, really long time,” she said. “I’d always been a little bit disappointed that I couldn’t figure out how to get it done. I was a different person out there this week, truly, in terms of just acceptance of ‘Hey, you’re making the best decision you can. You’re trying to execute the best you can. That’s all you can do. I can’t control anything else that anybody else is doing in the field.’”

Here are the scores of all the players in the field with strong Colorado connections: