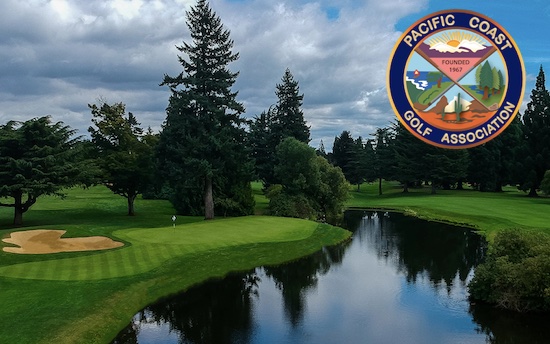 Colorado’s team of Davis Bryant (Aurora), Parker Edens (Fort Collins), and Matthew Wilkinson (Centennial) are in a four-way tie for 10th at the 55th Pacific Coast Amateur Championship, hosted this week at Columbia Edgewater Country Club in Portland, Oregon.  Edens led the group with an even-par 71 followed by Bryant who came in at two-over 73.  Wilkinson’s four-over-par 75 meant his score was dropped as the two lowest scores from each of the 15 participating state teams are counted.  The team competition, known as the Morse Cup, concludes following the first two rounds with individual play continuing over four rounds of stroke play.

Portland, Ore. – Ryan Burnett of Chapel Hill, N.C. fired a 5-under par 66 to take a one-shot lead after the first round of the 55th Pacific Coast Amateur Championship, hosted this week at Columbia Edgewater Country Club in Portland, Ore.

Burnett, who just finished his senior season as a member of the University of North Carolina men’s golf team, began the day even after his first nine holes with one birdie and one bogey. On the back nine, he caught fire shooting a bogey-free 5-under par with five birdies.

Burnett is no stranger to success, he was named a GCAA honorable mention All-American this past season and finished T2 in the NCAA Championship in May.

Four players sit just one back of Burnett after the first round; Max Herendeen of Bellevue, Wash., Brady McKinlay of Lacombe, Alberta, William Paysse of Temple, Tex. and Jiri Zuska of Klado, Czech Republic.

The Morse Cup team competition takes place concurrently during the first two days of the championship. There are 15 member Pacific Rim golf associations that comprise the Pacific Coast Golf Association, and each golf association selects three players to represent them in this team competition. Two of the top three scores from each team in rounds one and two will count for the Morse Cup portion of the event.