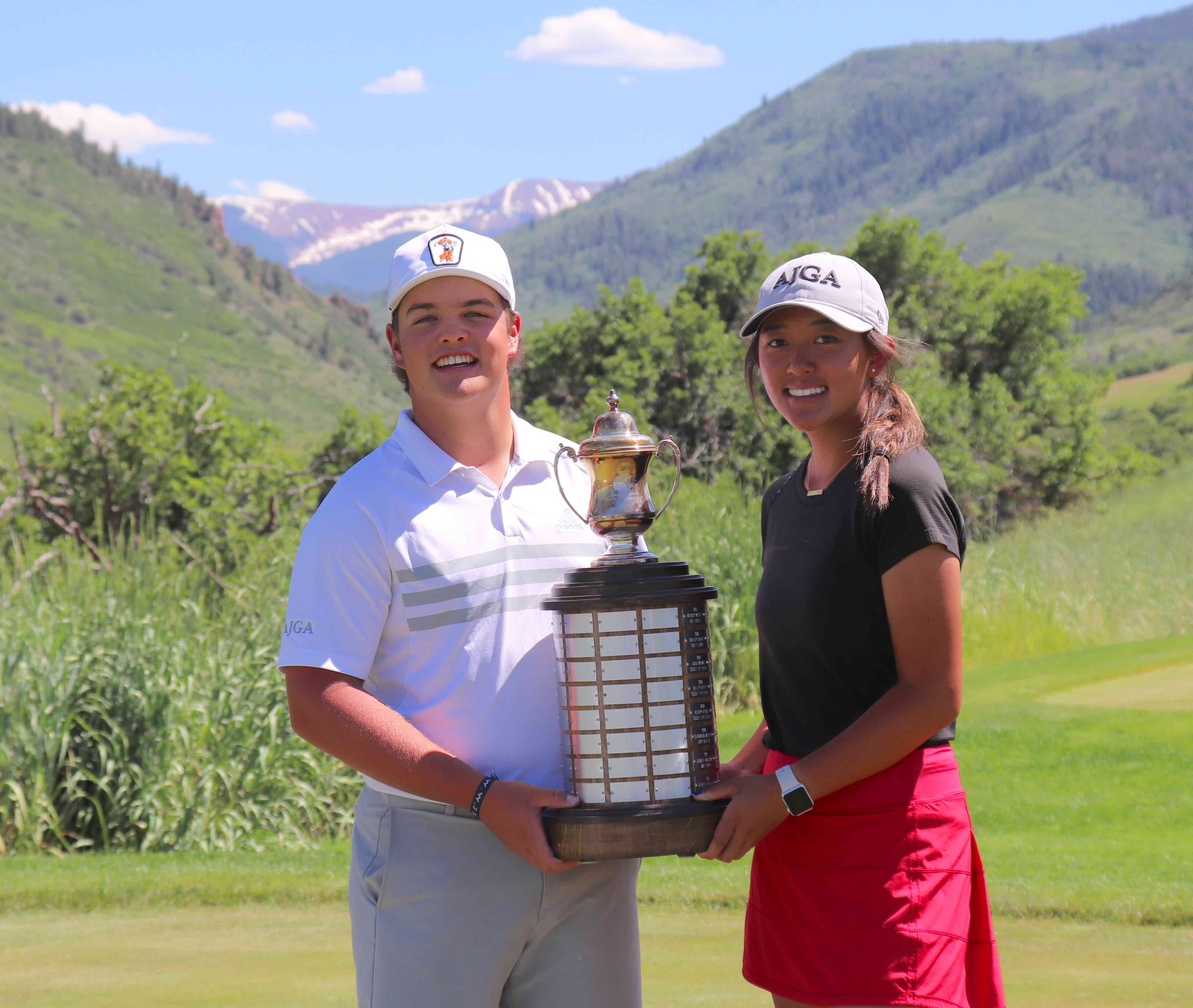 Dillon Stewart of Fort Collins didn’t win his first Junior Golf Alliance of Colorado major championship until last month. But just as he’s started to put together a streak, his time competing in such events has come to an end.

Meanwhile, Kaylee Chen of Greenwood Village has plenty of her junior career left in front of her, but she’s already making her mark at age 15.

In the second JGAC major of 2019, both Stewart and Chen went wire-to-wire in posting victories Wednesday in the Colorado Junior Amateur Championship at Frost Creek in Eagle.

Stewart, the 2018 JGAC Boys Player of the Year, prevailed by four strokes this week after winning the Colorado Junior PGA title by eight last month. And Chen won by two at Frost Creek despite playing her final seven holes in 4 over par. (The champions are pictured above.)

Stewart joins Davis Bryant of Aurora (2017) and Mary Weinstein of Highlands Ranch (2016) as players who have won both the Colorado Junior PGA and the Colorado Junior Amateur in the same season during the JGAC era, which dates to the beginning of 2016.

But the Colorado Junior Amateur marks Stewart’s final JGAC event as he’ll be playing golf at Oklahoma State beginning in the fall after competing in the U.S. Junior Amateur, the Junior America’s Cup and the national Boys Junior PGA Championship.

“It feels great (to go out this way), especially because I had such a good junior career, and (JGAC majors) had been the only thing eluding me,” the 18-year-old said. “Last year I came close (in the Colorado Junior Am), but Jake Welch just played solid and cut me out of it. Being able to get this one as my last Junior Golf Alliance tournament feels great honestly.”

Stewart, who took a six-stroke lead into Wednesday, closed with a 1-under-par 71, giving the 2018 Junior America’s Cup champion an 11-under 205 total.

Jackson Klutznick of Denver, who won the 3A boys state high school title and the JGAC Tour Championship last fall, placed second at 209 after a 69 that included seven birdies on Wednesday.

Connor Jones of Westminster, who tied for second in the Colorado Junior PGA, was third at 212 on Wednesday after a six-birdie 67, the best closing round at Frost Creek.

Stewart carded four birdies on Wednesday, giving him 16 for the three days.

“I’ve always just had the mindset, no matter if I’m leading by two or by 10, I want to extend my lead and beat everybody by a hundred,” he said. “I learned that the hard way in the (final round of the AJGA Hale Irwin Colorado Junior when he started with two-stroke lead but finished fifth). The front nine there I played too conservative and it hurt me more than helped me. I learned from that and just fired at pins and tried to make birdies today. Obviously I didn’t capitalize on a couple of them, but I played consistent the whole front nine and had a few hiccups on the back. But I played aggressive all day.

“Today I just kind of limped in. Thank God I gave myself a big enough lead.”

Chen likewise took a six-stroke advantage into Wednesday. That gave the Cherry Creek High School sophomore-to-be enough cushion to where she prevailed despite a 6-over-par 78 in the final round.

Winning the title “really means a lot to me,” she said. “My goal for a while now has been to win one of the JGAC majors — ever since I started JGAC in 2017. My hard work really has paid off in winning this major.”

Indeed, Chen has been playing a lot of good golf in the last month. She qualified for the U.S. Girls’ Junior, played off for the final spot in U.S. Women’s Amateur qualifying before falling just short, and then won this week.

In Eagle, she prevailed despite having never played Frost Creek before Monday’s opening round. But she had to overcome a considerable case of the butterflies heading into the final round.

“It was difficult even though I had a big lead,” she said. “I couldn’t sleep last night and I didn’t eat breakfast this morning. I was a little nervous today. But I think this is a really great experience and I can learn from my nerves.

“My mentality was to just play my game and not to worry about the score. I knew I had a big lead but I didn’t want to get too ahead of myself because I’d get too hyped and make mistakes. I tried to finish out strong, but it didn’t work out very well.”

It did yield a victory, though. For three days, Chen finished with an 8-over-par 224 total.

Defending champion Katie Berrian of Castle Rock made a run on Wednesday. After rounds of 78 and 79, she shot a girls-tournament-best 69 on the final day, leaving her two strokes back of Chen, at 226. She made four birdies and one bogey on Wednesday.

Sharing second place with Berrian was Ashley Kozlowski of Littleton, who posted a closing 73.