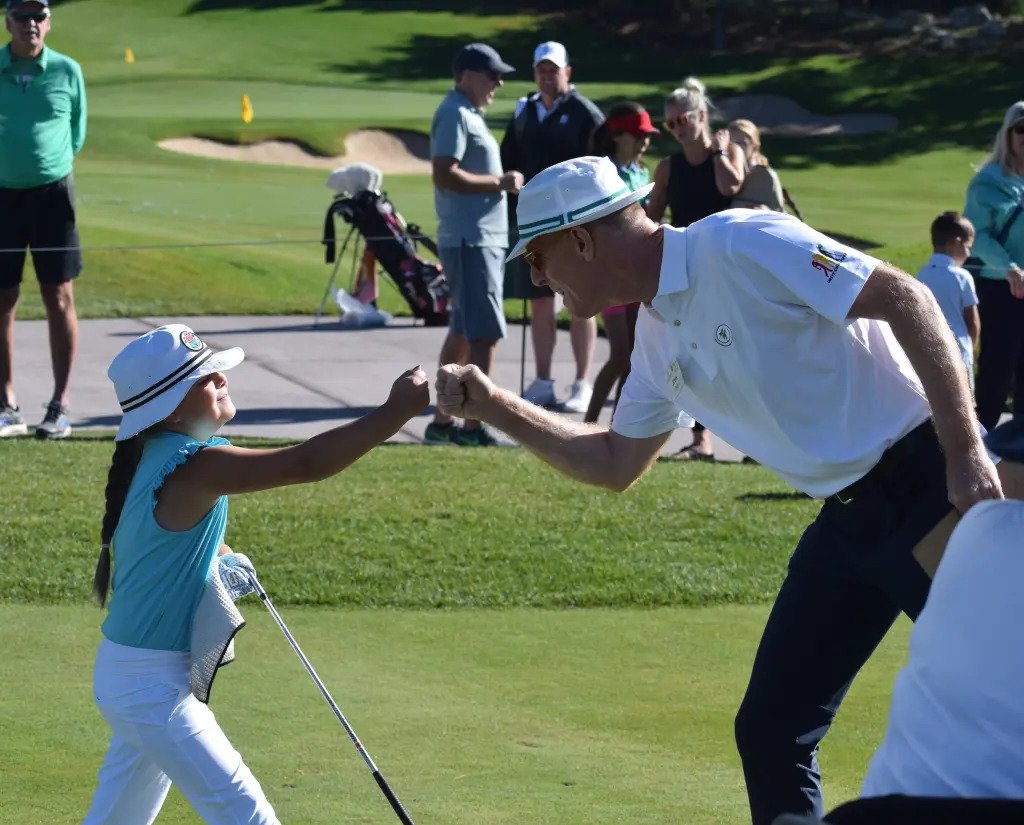 Colorado is on quite a roll with the Drive, Chip & Putt competition this year.

Five-plus months after a record four Coloradans competed in the DCP National Finals at Augusta National on the eve of the Masters — and Sophia Capua of Aurora won the chipping portion of the national title for her age group — two more in-staters qualified on Sunday for the 2023 National Finals.

“That means a lot. It’s amazing,” Eagan said of joining the list of DCP National Finalists from Colorado.

In all, eight age/gender division winners who competed at Castle Pines will be headed for the National Finals, set for Aug. 2 at Augusta National Golf Club, which the following week will host the Masters. At ANGC, 80 golfers in all will compete in driving and chipping in the practice area, then the putting on the 18th green of the famed course.

At Castle Pines, Shaw was the only overall regional champion of a division to also win all three of the individual disciplines. Not surprisingly that led to him posting the largest victory margin of the day, 32 points. The next-largest was Eagan in boys 7-9, 29 points.

“I had a lot of confidence going into this,” the 11-year-old Shaw said. “I’m just so excited” to have qualified.

Shaw estimates he’s attempted to qualify for the Drive, Chip & Putt four times, but before Sunday he had never made it past the sub-regionals, the second of the four stages of the event.

But, “My game has been getting a lot better,” he said.

That showed with his overall tally of 159 points, a personal best in the DCP. In the competition, points are aggregated for the three events, in which each competitor hits three balls per discipline. Shaw was most proud of his last drive, which traveled 237 yards down the first hole at Castle Pines.

“My head was really good,” Shaw said. “My mental side was really. good.”

As for Eagan, few players in Sunday’s competition had a shorter trip to the regional site as he lives about 10 minutes away, on the Plum Creek golf course. In fact, his dad said a person could literally see their house from where the qualifying was taking place near the driving range at Castle Pines.

“It’s very fun (to compete in regionals) close to home,” Jacob said. “There’s not a lot of traveling, so that’s good.”

But whether he had a trip of 10 or 1,000 miles, it would have been worth it to earn a spot at the National Finals. Not only did Eagan claim the overall title in his division, but he was tops in both chipping and putting.

“I’m feeling so excited,” said the 9-year-old, who noted that he’s been playing golf since about the time he learned to walk. “It’s just amazing. (Augusta National) is such a special place. Driving down Magnolia Lane has been the biggest dream so far in my life. It’s so cool to finally accomplish it.”

This puts the cap on a summer season in which Eagan finished sixth in his age group at the prestigious IMG Academy Junior World Championships, and placed second among Americans.

This year, Castle Pines is serving as one of 10 DCP regional qualifying sites around the country. The former home of the PGA Tour’s International (1986-2006) and the future site of the 2024 BMW Championship, Castle Pines finds itself in very good company among prestigious clubs hosting regionals. Also on that list are Pebble Beach Golf Links, Medinah Country Club, Desert Mountain, Qual Hollow, TPC Boston, Oak Hill, Scioto, The Bears Club and Champions Golf Club.

Colorado, which didn’t host its first DCP regional qualifier until 2019, when Colorado Golf Club broke the ice, had Castle Pines do the honors for the first time. A barbecue for the players and their families was held on Saturday night, then about 30 Castle Pines members were among the volunteers for Sunday’s competition.

“Castle Pines Golf Club is honored to host this event and our membership is thrilled,” said George Solich, the chairman and president of CPGC. “Our club is all about the game of golf and the history of the game of golf. We care about it deeply and we want to be part of something very special that Augusta National and the PGA of America and the USGA have come together and collaborated on. And I think the kids and their parents are really having a great time here.”

DCP is sponsored by the Masters, the USGA and the PGA of America. In Colorado, the Colorado PGA conducts the event with the help of numerous volunteers and courses/clubs. The competition is limited to players 7-15.

Here are the age/gender division regional champions from Castle Pines, where 96 kids competed on Sunday:

For all the results from Castle Pines Golf Club, CLICK HERE.