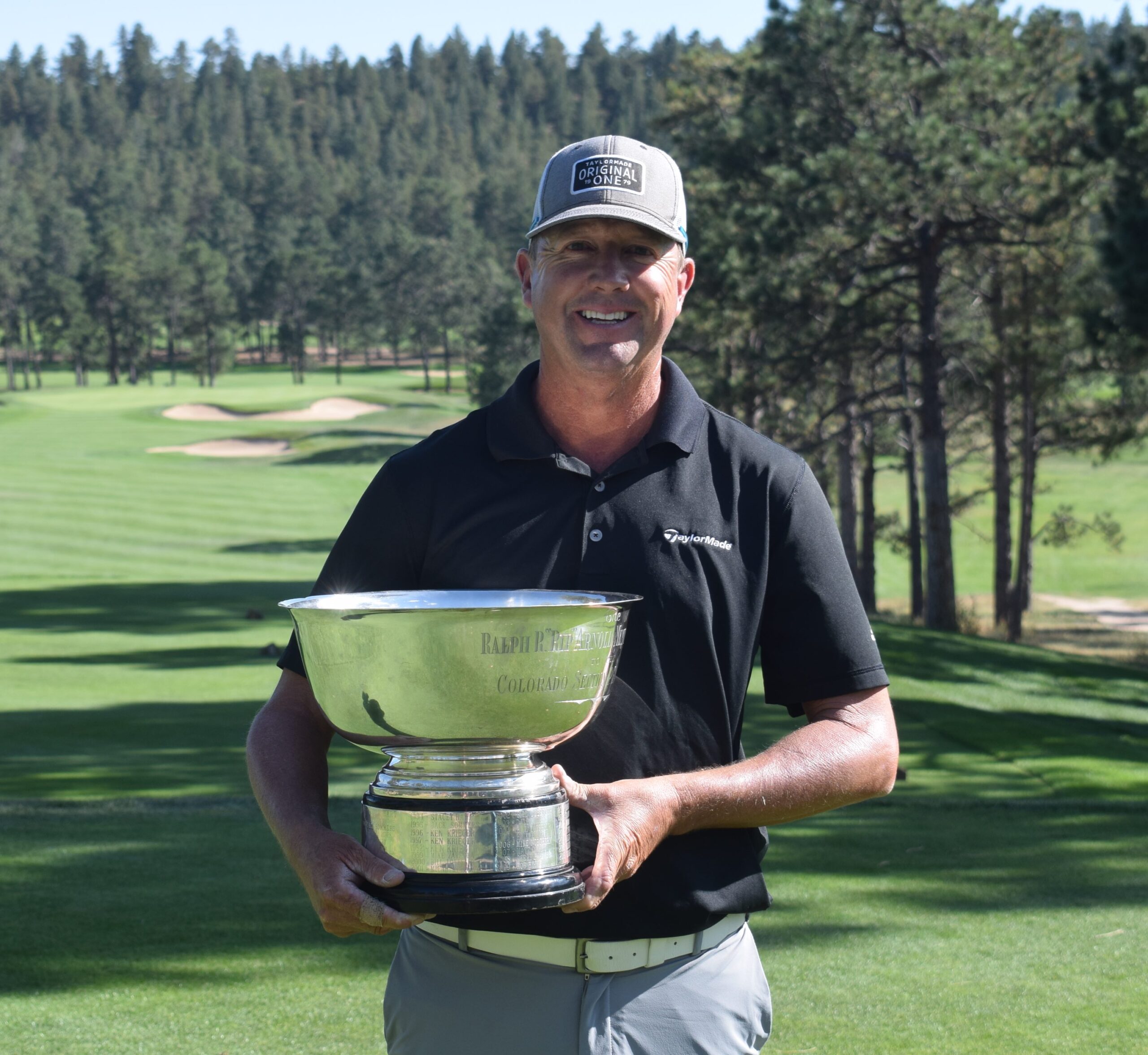 Twenty years ago, when Micah Rudosky of Conquistador Golf Course won the Colorado PGA Professional Championship for the first time, the 54-hole tournament started at Eisenhower Golf Club at the Air Force Academy.

Perhaps not coincidentally, when Rudosky earned his second CPGA Professional Championship title — on Wednesday — the event also began at Eisenhower GC. The difference was, this time it also ended at the same course.

You see, in 2001 when Rudosky prevailed, the first round was held on Sept. 10. Of course, the next day was 9/11, the day of the terrorist attacks on the U.S. Especially given that Eisenhower GC is located at the Air Force Academy, it probably goes without saying that the tournament didn’t end there as scheduled.

In fact, the event didn’t conclude until the end of September that year — as the final two rounds were moved to Riverdale Dunes in Brighton.

So while Rudosky can say he’s won the Section championship in two different years the event was held at Eisenhower, Wednesday marked the first time he actually hoisted the trophy at the Academy.

“Every time I get in this — the Section championship — that’s what I think about (having won the tournament when it was interrupted by 9/11),” Rudosky said on Wednesday. “It’s nice to get back here. Twenty years ago now; it’s unbelievable.”

All the circumstances aside, the fact that Rudosky won Colorado PGA Professional titles 20 years apart is quite a feat. In fact, it’s something only two golfers have done. Two years ago, Ron Vlosich claimed the championship 28 years after originally winning the event, but no one else in history has gone a couple of decades or more between his first and last victories in the tournament.

“I’m ecstatic,” said Rudosky, the PGA head professional at Conquistador in southwest Colorado since 1997. “It ranks high up there for me. It’s hard to win a golf tournament. You don’t win a ton of them. I happened to have won a few. I won one of these, and this one 20 years later. I’ll savor that for a while for sure.”

“To play in that Senior Section (championship) and play well and then to come here (and do the same) makes me feel good,” the 51-year-old from Cortez said. “It’s nice to have a couple of these championships under my belt and to be able to handle a little bit of the pressure.”

Rudosky’s win — which brought with it a $10,000 check — continues a remarkable trend regarding the Colorado PGA Professional Championship. Even though it’s an open-age tournament, the senior set (age 50 and older) have dominated in recent years when it comes to etching names on the trophy.

Rudosky’s victory marks the seventh time in the last nine championships that a senior golfer has claimed the title, with only Geoff Keffer (2016 and ’20) interrupting the run.

“They’ve obviously got the experience and play a lot of tournament golf,” noted 28-year-old Ben Lanting of Bear Creek Golf Club, the runner-up to Rudosky on Wednesday. “It’s got to speak to their experience and calm under pressure and having been around. They’re just good players.”

Added Rudosky: “We’ve got a lot of good players in this Section. Is it experience? Is it knowing some of the courses we’re playing on? And (because of improvements in equipment and golf balls) we’re hitting it as far — if not further — than we were (in our prime). That’s made it to where we can still compete.”

Whatever the case, Rudosky came out on top Wednesday by two strokes. And, it should be noted, other seniors finished fifth (Mike Northern, 58) and seventh (Sherry Andonian-Smith, also 58, and Matt Schalk, 50).

Rudosky made just one bogey in the final round and played his final 10 holes in 4 under par to card his second straight 3-under 69. That left him with a 3-under 213 total.

The only other player who matched or bettered par for the week was Lanting, who’s won the National Car Rental Colorado Assistant PGA Professional Championship three of the last four years, including in 2021. Lanting matched the low round of the tournament with a 5-under 67 on Wednesday, making two eagles, four birdies and three bogeys in the process.

Two eagles in a round is pretty remarkable, but perhaps takes a back seat to what Lanting did on Tuesday when he went 6 under in five holes (5-9) by going eagle, birdie, birdie, birdie, birdie. So in the last two days of the tournament, Lanting played the stretch of holes from 5 through 9 in 9 under par.

Caine Fitzgerald of Meadow Hills Golf Course, the 2012 champion, tied Lanting’s 67 — via six birdies and a bogey — on Wednesday to tie for third place at 218 with Christopher Hyten of Castle Pines Golf Club, who closed with a 71.

As for the title chase, Rudosky and Lanting shared the lead as Rudosky teed it up on No. 15. But Rudosky took sole possession of the top spot with a 5-foot birdie from behind the hole on the 15th. He went up by two with a birdie putt of almost the same length on No. 16. Then Rudosky sank another 5-footer on No. 17 — this time for par after leaving his tee shot short of the green and making a nice chip.

After that, with a two-stroke lead, he played No. 18 routinely to claim the title.

“The way I rolled the putter — the touch I had — was the difference,” Rudosky said.

“It’s nice to come out here and be able to compete with these young guys. I’ve had chances (to win this title again over the last 20 years), but the guys are good and you have to play well. If you’re not right on it, you’re not winning. This course here kept our scores around even-par. We didn’t have to shoot 10-12 under. I happen to make a lot of pars and a few birdies every now and then.”

By the way, though Rudosky swings right-handed after making the transition from lefty to righty as a young boy, he putts left-handed — and always has. He’s just more comfortable that way. But a switch from a regular-length putter to a long one that he made mid-summer has paid significant benefits. It’s with the longer putter that he’s won both the Senior Section and overall championships since Aug. 1.

“That long putter has been better for me for certain,” he said.

Based on results, there’s little doubt of that.

For all the scores from the Colorado PGA Professional Championship, CLICK HERE.