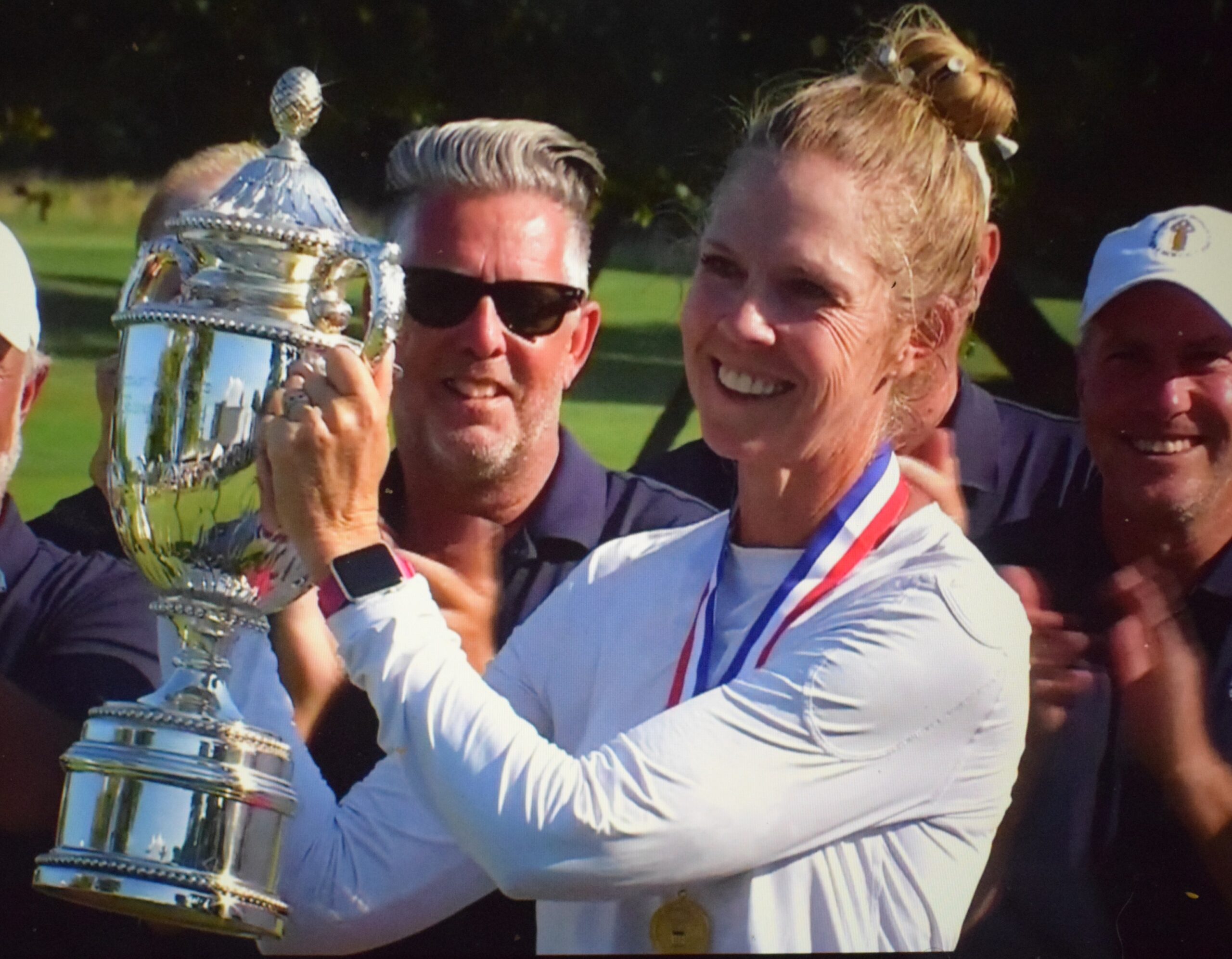 Colorado Golf Hall of Famer Jill McGill, who pulled off an improbable come-from-behind victory over a stellar field at the U.S. Senior Women’s Open in late August, will be inducted into the Sportswomen of Colorado Hall of Fame after being honored by the organization for the third time.

McGill will be one of four females in the golf realm to be honored by the SWOC when it holds its annual awards celebration March 12 at the Hyatt Regency Denver Tech Center.

Also earning recognition, based on 2022 achievements, are Leigha Devine of Windsor and Rutgers University (college golf) and Hadley Ashton of Erie and Erie High School (high school golf), along with Ann Wolta Blackstone, who will receive the Joan Birkland Leadership Award.

McGill, a Colorado native and Cherry Creek High School graduate, played in the U.S. Senior Women’s Open for the first time, and prevailed, earning arguably the most prestigious title in women’s senior golf. With the victory, she joined Jack Nicklaus, Tiger Woods, Arnold Palmer, Joanne Carner and Carol Semple Thompson as winners of three different USGA championship titles, in McGill’s case having also captured the 1993 U.S. Women’s Amateur and the 1994 U.S. Women’s Amateur Public Links. She became the first American to claim victory at the U.S. Senior Women’s Open, which was contested for the fourth time.

McGill, who earned more than $2.3 million in a long LPGA Tour but never won a title there, overcame a stellar list of players on the final-round leaderboard  — Annika Sorenstam, Laura Davies, Juli Inkster and Helen Alfredsson, among them.

McGill, who has the distinction of being the first individual champion (1990) at a sanctioned girls state high school championship in Colorado, was recently named one of the Colorado Golf Hall of Fame’s Golf Persons of the Year for 2022.

Devine followed up a stellar 2021 (titles at the CGA Women’s Stroke Play and Women’s Match Play, and qualifying for the U.S. Women’s Open) with another outstanding year. She successfully defended her title in the CGA Women’s Match Play, placed second at the Women’s Stroke Play, qualified for her first U.S. Women’s Amateur, and posted her first individual victory in a college tournament. In both 2021 and 2022, Devine earned CGA Women’s Player of the Year award.

Devine came ever so close to becoming the first player since the late 1980s to sweep the CGA women’s major championships for two consecutive years. Wendy Werley won the women’s Match Play and Stroke Play in both 1988 and ’89. But Kelsey Webster of Boulder ended her streak in defeating her by a shot in the Women’s Stroke Play. Later in the summer, Devine not only made match play in her first U.S. Women’s Amateur, but advanced to the round of 32. Then in September, the Fossil Ridge High School graduate earned an individual college title at the Badger Invitational.

Meanwhile, Ashton had another outstanding season in the junior ranks, winning the 4A girls state high school title as a freshman and the AJGA Hale Irwin Colorado Junior, as well as another AJGA championship. She qualified for the 2023 U.S. Women’s Amateur Four-Ball (with Brynn Kort), earned a Future Famer award from the Colorado Golf Hall of Fame, and was named to the AJGA 12-15 All-Star team. In 2022, Ashton competed in both the U.S. Girls’ Junior and the U.S. Women’s Four-Ball.

Wolta Blackstone, who last year received a Lifetime Achievement Award from the Colorado Golf Hall of Fame, coached the St. Mary’s Academy girls golf team to 3A state championships in both 2021 and ’22, with St. Mary’s Madeline Bante claiming the individual title last year.

Wolta Blackstone has made her mark on the game as a longtime LPGA teaching professional and coach. But she’s also known as a volunteer extraordinaire, giving generously of her time, particularly to golf-related causes, and raising money for worthwhile endeavors despite having battled breast cancer on more than one occasion.

The honor Wolta Blackstone is receiving is named in honor of SWOC co-founder Joan Birkland, a former state champion in both golf and tennis who is a member of the Colorado Golf Hall of Fame and the Colorado Sports Hall of Fame.

The Sportswoman of the Year, the organization’s highest honor, will be announced at the March 12 awards celebration. It’s possible that Colorado native Jennifer Kupcho, whose three LPGA Tour victories in 2022 included a major championship, could be in the running there. Kupcho went into the Sportswomen of Colorado Hall of Fame in 2016.