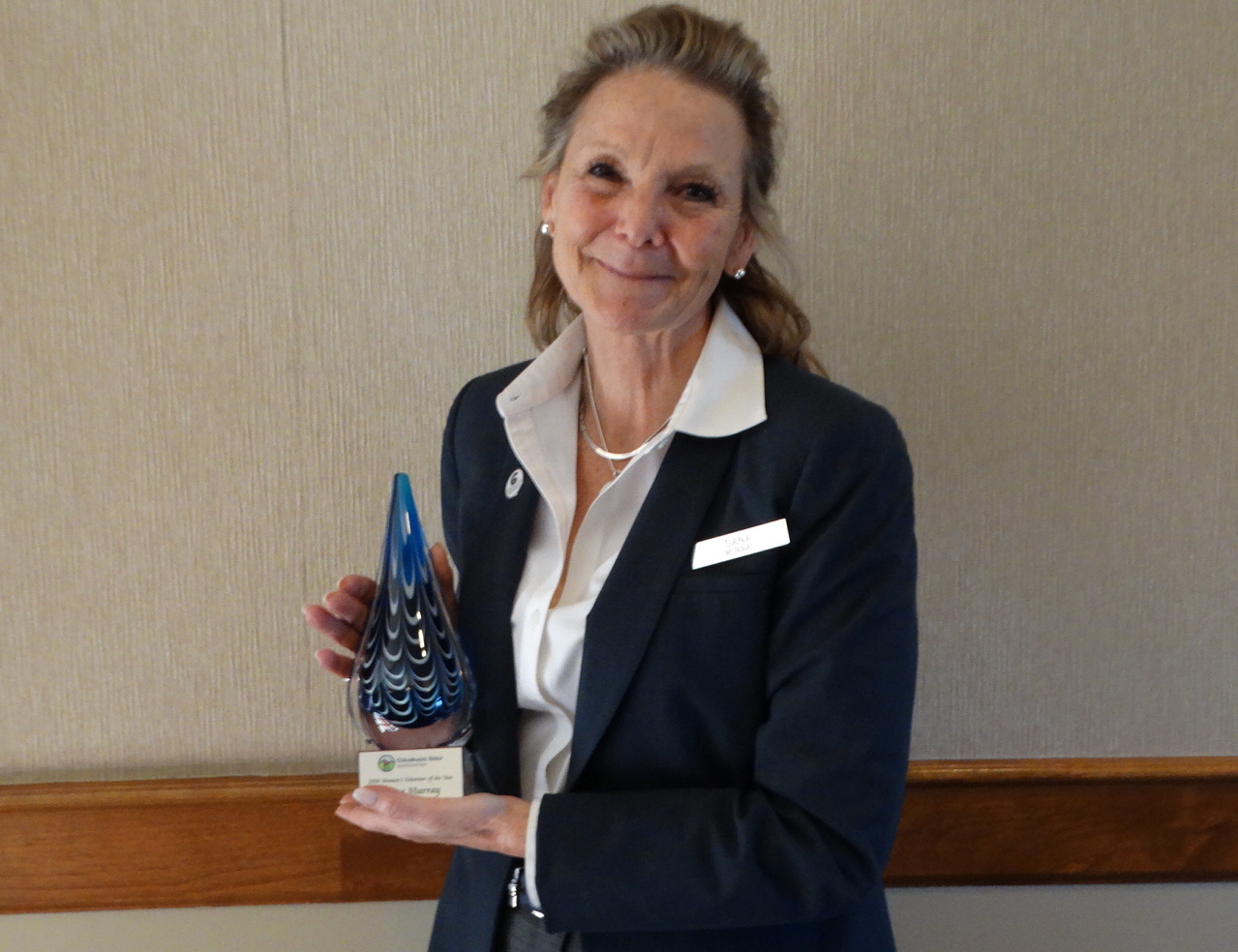 Passion for the game, background as judge make Murray an ideal fit as rules official, board member

Dana Murray, who recently was named the CGA’s Women’s Volunteer of the Year for 2018, was asked what appeals to her about the volunteer work she does in golf.

The answer she gave would no doubt apply to many of the volunteers who selflessly give of their time to make golf events, programs and tournaments the successes that they are.

“Some time ago I read that Winston Churchill made a comment that goes, ‘We make a living by what we get, but we make a life by what we give,'” Murray said recently. “Because golf is such a passion of mine, it’s a perfect match. It’s the greatest game ever played.”

Murray came to golf relatively late in life, but took up the game wholeheartedly at age 45. But that was in the midst of her professional career — she spent 27 years as an Arapahoe County judicial officer, mostly as a County Court Judge — so it was after retiring in 2016 that she went into golf-related volunteer work with a passion.

Murray became an on-course rules official for the CWGA and for the LPGA Amateur Golf Association, formerly known as the Executive Women’s Golf Association. Now, in fact, Murray serves on the national tournament committee for the latter organization.

Rules officiating led to Murray being invited to join the board of directors for the CWGA in 2017. The CWGA and the CGA integrated on Jan. 1, 2018, and Murray became part of the CGA board. And, as of this year, she’s part of the CGA’s Executive Committee, along with the Nominating Committee.

When Murray was presented the Women’s Volunteer of the Year Award at the recent CGA Women’s Golf Summit, the association recognized both her and the work of all of their many volunteers:

“One of the main bloodlines for the CGA is the volunteers. Whether they are course rating, rules officiating, helping with programs or serving on our board, we wouldn’t be able to do all that we do without them.

“This year our Volunteer of the Year went above and beyond the call of duty. Dana Murray first joined the CWGA board of directors in 2017. When the two boards for CGA and CWGA came together, Dana volunteered to be on the CGA Governance Committee and was soon charged with updating the bylaws to reflect the integration of the two associations. As background, Dana is a lawyer and former judge.

“In addition, to taking on the bylaws, she volunteered as co-captain of the CGA volunteer team for the 2018 U.S. Senior Open at The Broadmoor. Her enthusiasm for both roles was unparalleled. Everything she has done this past year is remarkable.”

Like past CGA Jim Topliff on-course rules official award winner Tom Kennedy, Murray used her background as a judge to make a seamless transition to becoming a rules official.

“We are trained to know the rules,” she said of being a judge. “You have to figure out what the facts are, you apply the rules to the facts, and you make your call. And that’s exactly what we have to do out on the course. Tom and I had good training at that.”

But it was Murray’s volunteer work at last summer’s U.S. Senior Open at The Broadmoor in Colorado Springs that might have made an equally large impression.

As co-captain of the CGA volunteer team there, Murray was one of the people responsible for organizing and overseeing the CGA volunteers who were based on the par-5 ninth hole at the East Course, which happens to be one of the farthest points on the golf course from the golf shop and the hotel.

“I made the mistake of driving down there every day (from her home in Centennial), so I had to leave here about 5:30 a.m. or so,” Murray said. “I was away from my house, including travel time, 14 hours every day” for six days that week. “It was blisteringly hot; it was a challenge. You’re on the hole from 6:45 in the morning until 7 o’clock at night. And one day I walked something like 10 1/2 miles. But when it was all over, I look back on that and say, ‘I’m glad they had me do that.’ It was a great experience.”

And why is that?

“This is going to sound like complaining, but it’s actually in great praise for all of those other volunteers,” she said. “We were on No. 9, the farthest (hole) away from everything and it was so hot and there was no shuttle for the volunteers, so everybody had to hoof it all the way up there and we were really shorthanded so I couldn’t very well give them lunch breaks and even if I did it would have to be like 2 1/2 hours because they had to walk all the way down to headquarters.

“These guys were such troopers; they just stayed, they just toughed it out. So when it was all over, I sent them all an email that said ‘if there’s ever like a world catastrophe, I’ll meet you all at the top of the hill because I know we’ll survive.'”

As for her duties as a rules official, she plans on working five or six CGA women’s tournaments this year, in addition to three or four with the LPGA Amateur Golf Association.

With the modernization of the Rules of Golf that took effect on Jan. 1, it’s been a demanding time for rules official to get up to speed on the changes. But, though Murray likens learning the Rules of Golf to “drinking out of a fire hose”, she said the process has been a good thing for her.

“I came to golf very late. I’m not one of those girls who played in college or high school or anything like that,” she said. “But because I am a rules person, I always made it a point to know the rules. Becoming a rules official, you start peeling the onion layers and you learn them better. Being a rules official has deepened my understanding of the rules and given me even a greater appreciation for all that’s our game.

“I am a converted Catholic, but my whole life I grew up around Catholics. And when the new rules were coming, I thought to myself, ‘This is kind of like learning the mass in Latin and now we switch it to English.’ I will say I had a grasp of the old rules, but I benefited from the new rules because it was, ‘just start fresh here.’

“I went to the four-day rules class in October, so I’ve been working on knowing, testing and teaching rules since the fall. I feel like going into the season, I’m ahead of the game.”

Murray works mainly the CGA women’s championships in which the majority of competitors are 20-plus handicappers, a category in which Murray herself falls, as a 27.

“Knowing the statistics that show that something like 70-some percent of women golfers play to something higher than a 25 (handicap), that we put on events for those gals to have a great time and play their hearts out is great,” Murray said. “So probably at this point my greatest joy — because of what it means for everybody — are the higher-handicap tournaments. With those events, the CGA is tapping into a really huge resource.”

Murray takes pride in being a dedicated golf volunteer, and for her family’s longstanding Colorado roots. A graduate of Manual High School, Colorado College, and the University of Denver law school, she’s a third-generation Coloradan.

“When I was a Girl Scout we’d sing a song,” Murray noted with a chuckle. “‘Colorado-born and Colorado-bred, and when I die I’ll be Colorado dead.'”