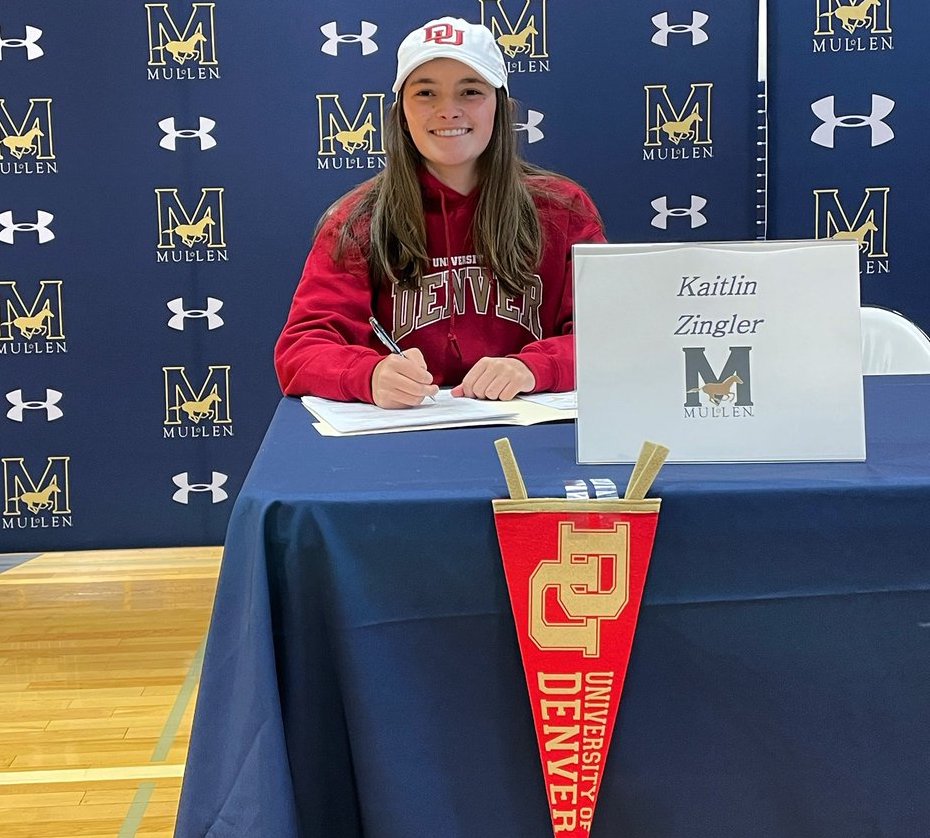 Kaitlin Zingler of Mullen will be playing her college golf close to home, at DU.

Junior golfers from across Colorado — from the southwest to the southeast to the central and the north — started making their college commitments formal this week as the National Letter of Intent signing period for the sport began on Wednesday.

All told, at least a half-dozen Coloradans — including many of the top junior players in the state — have committed to NCAA Division I programs, with others headed for teams at other levels of college golf.

Several of the locals will remain relatively close to their homes — within 250 miles, let’s say:

— Kaitlin Zingler of Lakewood and Mullen High School — University of Denver (NCAA Div. I): Zingler recently was named one of the winners of the CGA’s Grace Burke Award, given to female high school golfers who exhibit character, leadership and personal integrity through their actions in competing and participating in various golf programs. Zingler was a semifinalist in this year’s CGA State Junior Championship and placed ninth in the 4A state high school tournament.

— Reece Bandemer of Loveland and Loveland HS — University of Northern Colorado (NCAA Div. I): The Loveland High School golfer finished sixth among the girls at the Colorado Junior PGA Championship this year. She helped the Red Wolves win the 5A state high school team title in 2021.

— Noah Wagner of Pueblo West and Pueblo West HS — University of Wyoming (NCAA Div. I): Wagner, who finished eighth individually in the 4A state high school tournament this fall for Pueblo West, qualified for the U.S. Junior Amateur this year. He’s also a regular for the Pueblo West basketball team.

— Thayer Plewe of Cortez and Montezuma-Cortez HS — University of New Mexico (NCAA Div. I): Plewe, a senior at Montezuma-Cortez, won’t begin playing for UNM until 2025 as he plans to go on a two-year mission in Portugal for the Church of Jesus Christ of Latter-day Saints in the meantime. He won the 3A state high school individual title by five strokes following a final-round 64 in which he played his last five holes in 5 under par. This after being runner-up at state as both a sophomore and a junior. In June, Thayer, who plays golf left-handed, won a Junior PGA national qualifying tournament at UNM’s Championship Course.

The other Class of 2023 Coloradans who have signed NLIs or verbally committed to play college golf include the following: (Note: This list will be updated. Information on others who should be added to this list can be sent to GolfJournal@ColoradoGolf.org)

— Kyle Leydon of Commerce City and Brighton HS — Creighton University, Neb. (NCAA Div. I): Leydon won the 2022 Colorado PGA Junior Invitational — a junior major in the state — and finished first on the CPGA’s boys junior points list this year. He also was named one of the Colorado Golf Hall of Fame’s Future Famers for 2022. Leydon, a member of the First Tee of Green Valley Ranch, tied for seventh place in the First Tee National Championship. He ended up eighth individually in this year’s 5A state high school tournament. Leydon, a member of the Hale Irwin Player Program at CommonGround Golf Course, represented Colorado on its four-player Junior America’s Cup team. He finished 15th in his age group against a very strong field this month at the Notah Begay III Junior Golf National Championship.

— Luke Cushman of Castle Rock and Castle View HS — Boise State, Idaho (NCAA Div. I): Cushman qualified for the U.S. Junior Amateur this year and advanced to the final qualifying stage of the U.S. Open. He placed 14th individually in the 5A state high school tournament. In 2021, he was runner-up among the boys at the AJGA Colorado Springs Junior by Century Health.

— Maryn Harlow of Loveland and Loveland HS — Missouri Southern (NCAA Div. II): She was on Loveland’s 5A state high school champion team in 2021.

Meanwhile, here are the out-of-state golfers who have committed or signed with Colorado-based programs: