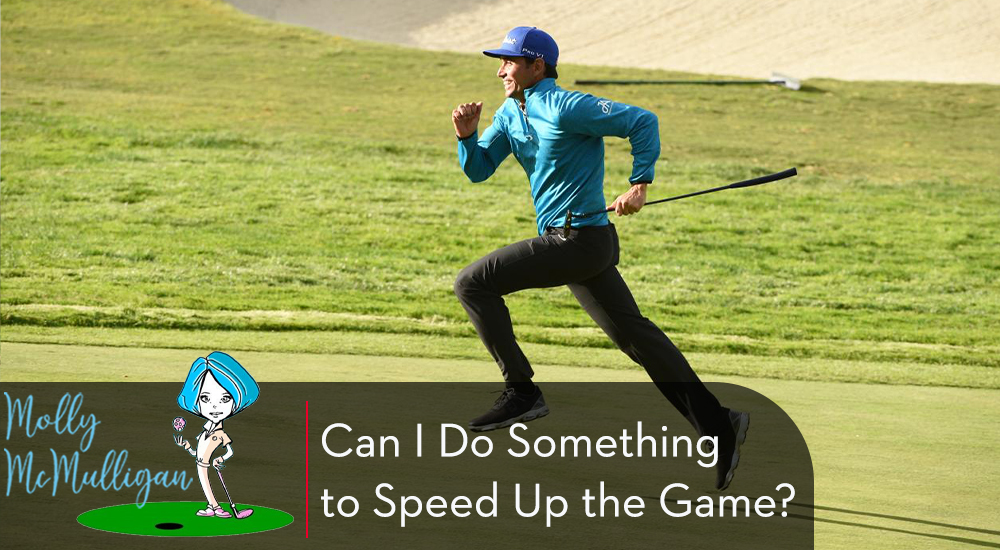 Dear Molly: I think golf should take no more than four hours. But these newbies on the course are driving me crazy with their tee-talk, partying, bad games and incessant putt reading. What can I say or do to move them along?

I used to look forward to seeing the fashion do’s and don’ts on the last page of a certain women’s magazine. There was nothing more entertaining than the don’ts: hair so big that birds got stuck there, striped shirts clashing with flowered skirts, bikinis that were just too teeny-weenie. So let’s just start here with the don’ts.

Don’t tell players to shut up and play faster, because you’ll be spending more than four hours with people who can’t stand you. Don’t give them swing tips: You’ll slow things down even more. And, whatever you do, don’t ask the marshal to move that group in front of you out of the way.

“A round of golf is taking four hours and 40 minutes, or longer,” says Greg With, chairman of the CGA’s Rules of Golf Committee.  “And in my mind, that’s not acceptable. But the golf course’s management side doesn’t want to make people angry because they might not come back, and that’s revenue.”

“Newbies, we want them,” says longtime USGA rules official Karla Harding, who lives in the Fort Collins area and has worked many a CGA tournament. “Without newbies, our game will die. We need to keep people coming.”

Greg, Karla and other experts who considered this question carefully saw two issues between the lines: 1. pace of play and 2. culture clash. But both issues relate to the pandemic-driven influx of new players, particularly at public courses.

Karla, a former traffic engineer, says the roads (courses) have gotten so full, it takes only one car (person) to hit the brakes (lose a ball) to create a big backup that takes a while to clear. Also, she notes, “Some courses are easier, some are harder, and not every course is going to play in four hours. If the average time is four and a half hours and you want to play in four, you’re going to have a hard time.” Greg points out that most municipal courses are sending out foursomes every nine or 10 minutes, so there are bound to be stalls at par 3s and shorter par 5s. He says, “That’s like the accordion that goes in and out, but once you jam it up, you can’t gain that time back.”

That, my friend, is not the fault of the newbies’ talking, partying, bad games and incessant putt reading. Indeed, Karla says the intermediate players are more the problem, because they hit the ball far enough to lose it and are reluctant to pick up and move on when they’re putting for 13.

So, what can you do?

First, understand that golf courses do not universally aspire to a four-hour standard, and you will have to search out a course that does. Also, get out there first thing in the morning and play aerobic golf, maybe in three and a half hours! (This also used to work in the evening, but now there is bound to be someone holding you up.)

Next, encourage your group to keep up or catch up with the group in front. Play from the tee that fits your game. Leave the flagstick in. Pick up at double net par. And play ready golf, not what Greg describes as “golf by committee,” where cartmates go together to each ball and discuss shot options.

“The American Junior Golf Association does some really cool things with pace of play,” says Greg. “If they’re playing in groups of four, when the first person putts out, that player is required to start walking to the next tee. They can tee off if they want to but aren’t required to. Then the next person to putt out walks off, and the last two stay until they’re done.” It is not rude for two players to move to the next tee while two are finishing. When Mr. McMulligan is playing from the back tees with three gals playing from the front, we try to send him off the green first so he can get us started on the next hole.

As for the culture clash, shall we declare a curmudgeon alert? Are you that golfer with no friends paired with me, Mr. McMulligan and our single pal on Sunday? One solution to culture clash is to fill your foursome with others with similar approaches to the game. Another is to call on all the good manners you’ve learned and try to get along with those who approach golf differently, because rarely will you be able to play alone.

Finally but mainly, please remember that golf is a game. It is supposed to be fun. Who complains that a vacation lasted too long, the band played three encores or the host opened too many bottles of Dom Perignon? You’re playing golf in Colorado. How intolerable can that be? Enjoy the scenery and your companions, even if their hair is too big, their bikinis too small and their outfits too mismatched.

CLICK HERE to view a helpful guide on getting a prime tee-time during Colorado golf’s roaring ’20s!