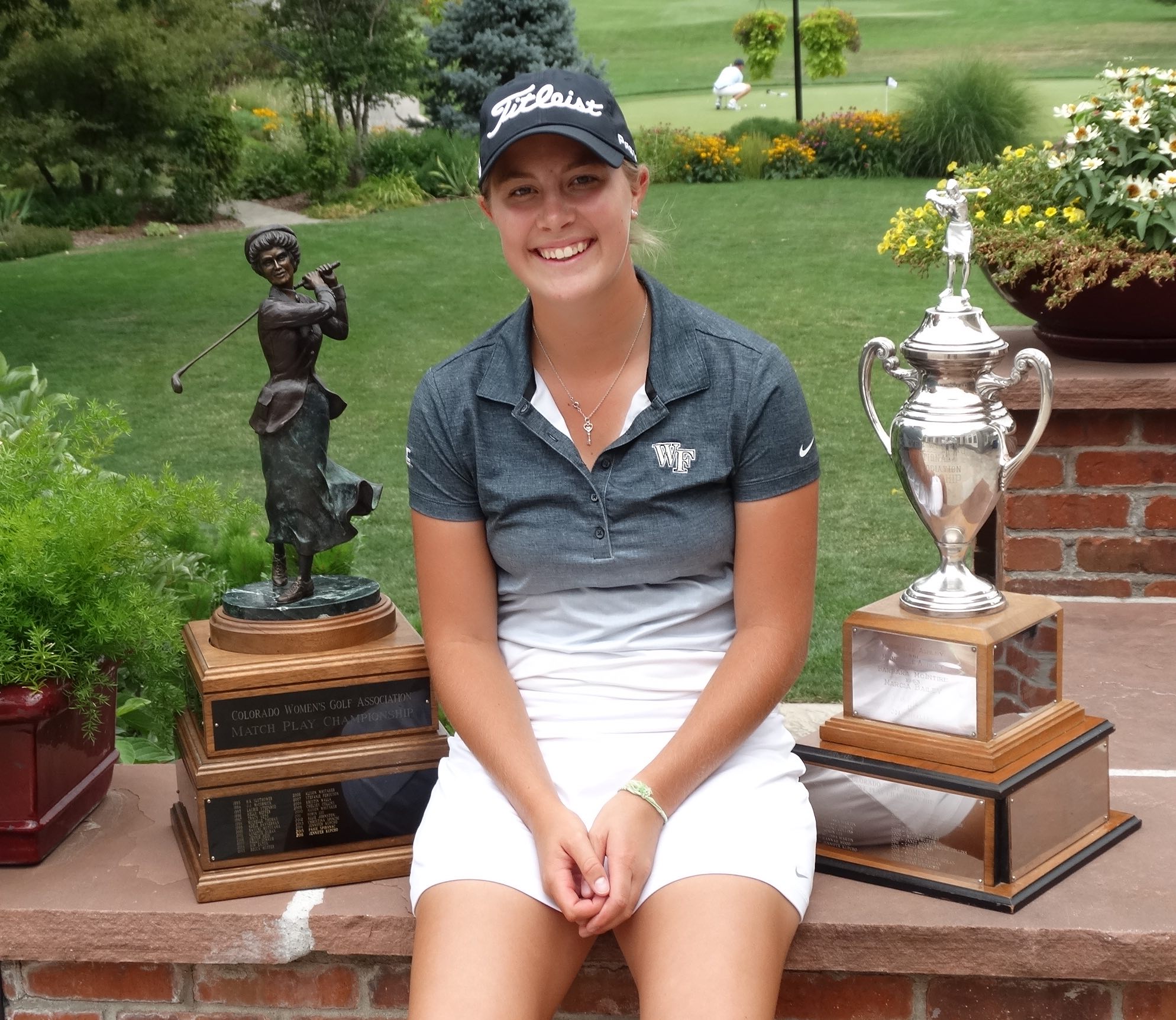 Jennifer Kupcho completed a single-season sweep of the CWGA's major titles in 2016 with a victory in the Stroke Play at Denver Country Club.

Milestone anniversaries we’ll be celebrating in Colorado golf this year

It’s sage advice for anyone involved in a relationship.

For our purposes here, we don’t want to forget milestone anniversaries either — in our case, ones we’ll celebrate this year in Colorado golf.

In other words, the “biggies”.

We’ll start with the old days — as in the really old days — and progress toward the present.

— According to the Denver Country Club website, the club becomes the first one west of the Mississippi River to be admitted to the USGA. In 1901, DCC is one of the 15 founding member clubs of the Trans-Mississippi Golf Association.

— The CGA Match Play is contested for the first time, with Frank Woodward prevailing for the title. Woodward, a member at Denver Country Club, goes on to become president of the USGA in 1915.

— The Broadmoor Invitation — originally known as The Broadmoor Amateur Open — begins a 75-year run as a prestigious national amateur tournament.

— Mrs. M.A. McLaughlin, the inaugural winner of the CWGA Match Play, captures the championship for the third and final time.

— Park Hill Golf Club — which hosted many big-time golf events, including exhibitions that drew some of the world’s most prominent players — opened. The course in north Denver has now been closed for more than two years.

— Future Colorado Sports Hall of Famer Babe Lind wins the CGA Amateur for the first of three times. He would also capture the 1946 CGA Match Play crown and become the first Colorado native invited to the Masters.

— The prestigious Western Amateur comes to The Broadmoor, with Bud Ward winning for the second straight year. Ward twice captured U.S. Amateur titles, including in 1941.

— Babe Zaharias, a resident of Edgewater at the time and now a World Golf Hall of Famer, wins the U.S. Women’s Amateur in Tulsa, the Women’s Trans-Miss at Denver Country Club, and the second of three straight titles at Broadmoor Ladies Invitation.

— Wellshire Golf Course in Denver hosts the U.S. Amateur Public Links for the first of two times, this one won by Smiley Quick. Quick would go on to claim the Rocky Mountain Open overall title in 1951.

— Dick Campbell is elected CGA president, beginning what would become the longest term for a president in the association’s history (11 years).

— The Denver Open Invitational is held at Meadow Hills Country Club, with Dave Hill winning, marking the second of his 13 victories on the PGA Tour.

— The CGA merges with the Denver District Golf Association, bringing all state amateur golf tournaments under the CGA’s control.

— Future Colorado Sports Hall of Famer Joan Birkland wins the CWGA Match Play for the second of four times in the 1960s. Birkland was also a state tennis champ three times in the decade.

— Dow Finsterwald, winner of the 1958 PGA Championship and 11 other PGA Tour events, wins the second of his three Colorado PGA Professional Championships.

— Hale Irwin, a graduate of Boulder High School and the University of Colorado, claims the first of his 20 PGA Tour titles, the Sea Pines Heritage Classic.

— Boulder resident Bob Byman, at age 16, becomes the youngest winner of the CGA Amateur. Byman would go on to win the 1972 U.S. Junior Amateur and a PGA Tour event.

— The Colorado Cup Matches, a Ryder Cup-like competition between top CGA amateurs and the Colorado PGA pros, is conducted for the first time, with the pros prevailing at Lakewood Country Club.

— The Jack Nicklaus-designed Castle Pines Golf Club, which has hosted more PGA Tour events than any other course in the state (21 Internationals), opens.

— Carol Flenniken, champion of a U.S. Girls’ Junior, a national college title and a British Ladies Amateur, wins the CWGA Stroke Play for the eighth and final time.

— Amy Benz, a future LPGA Tour player, wins the title in the Women’s Trans National at The Ranch Country Club.

— The Jerry Ford Invitational in Vail is won by Tom Purtzer.

— Future Colorado Golf Hall of Famer Jack Sommers earns the Rocky Mountain Open title in Grand Junction, where he grew up. It was the second of his four RMO victories.

— The Colorado Open is played at Hiwan Golf Club in Evergreen for the 28th and final time. Future Colorado Golf Hall of Famer Bill Loeffler takes home the title for the first of three times.

— Future Colorado Golf Hall of Famer Janet Moore earns the championship at the CWGA Stroke Play for the first of five times in seven years.

— Andrew Magee takes home the trophy from the Jerry Ford Invitational in Vail.

— Steve Jones, who grew up in Colorado and played golf for CU, wins the U.S. Open at Oakland Hills after going through Sectional Qualifying to get into the field. It was one of Jones’ eight PGA Tour wins.

— Former CU golfer Jonathan Kaye, who would go on to win twice on the PGA Tour, captures the first of his two Colorado Open titles.

— Little-known Clarence Rose wins The International at Castle Pines for his first and only PGA Tour win.

— The 20th and final Jerry Ford Invitational in Vail is conducted, with Dillard Pruitt winning.

— Stewart Cink, a future winner of the British Open, captures the title at the Nike Colorado Classic at Riverdale Dunes.

— The CGA — and later the CWGA — enters into an agreement to purchase the former Lowry Air Force Base Golf Course, which eventually would become the site for CommonGround, a new course that opened in 2009.

— Judy Bell of Colorado Springs is inducted into the World Golf Hall of Fame five years after becoming the USGA’s first female president.

— The International at Castle Pines is won by Tom Pernice Jr., who becomes one of the oldest players to capture this title, at age 41. After securing the victory, Pernice is embraced by his two daughters. One of the girls, Brooke, who has a disease that causes blindness, puts her hand on her father’s face, trying to feel the emotion of the moment. The scene is caught by CBS cameras and becomes an indelible image for many onlookers.

— Colorado School of Mines golfer Marty Jertson, who played in both the U.S. Open and the PGA Championship in 2020, wins the CGA Amateur.

— In just the third U.S. Women’s Open ever held in Colorado, So Yeon Ryu wins in a three-hole aggregate playoff at The Broadmoor for the first of her two women’s major titles to date. The event draws more than 130,000 fans for the week.

— The Colorado PGA and the CGA and their allied associations in the state partner for a Golf in Schools program which introduces kids to the sport through P.E. classes at schools.

— Green Gables Country Club, a historic course which hosted six LPGA Tour events and one tournament on the Senior Tour, closes in the wake of the Great Recession after 82 years in operation.

— Part-time Coloradan Hollis Stacy, a three-time winner of the U.S. Women’s Open, lands a spot in the World Golf Hall of Fame.

— Coloradan Dennis Lyon wins the USGA’s national Green Section Award, which recognizes a person’s distinguished service to the game of golf through work with turfgrass.

— Michael Lee of Greeley wins the CGA Match Play title. The former Colorado School of Mines golfer passed away late in 2020 due to complications from Covid-19.

— Former CSU golfer — and now a Denver-area resident — Martin Laird wins for the second of four times on the PGA Tour, at the Arnold Palmer Invitational.

— Colorado native and now LPGA Tour member Jennifer Kupcho wins the second of her three CWGA Stroke Play titles, this one at Denver Country Club, and also captures the CGA Women’s Match Play crown. Kupcho goes on to win the 2018 NCAA Division I women’s national title and also was triumphant at the inaugural Augusta National Women’s Amateur in 2019.

— The CWGA celebrates its 100th anniversary. A couple of years later the CGA and the CWGA join forces to become a single organization.

— Both of the NCAA Division II national championships are held in Colorado, hosted by Green Valley Ranch (men) and CommonGround (women).

— The Evans Scholarship for caddies at CU completes a $6 million renovation and expansion of the scholarship house.

— Former USGA president Judy Bell, a longtime resident of Colorado Springs, receives the USGA’s highest honor, the Bob Jones Award, which recognizes an individual who demonstrates the spirit, personal character and respect for the game exhibited by Jones, who won the Grand Slam in 1930.

— Nick Mason of Parker wins the Rocky Mountain Open, becoming the last Coloradan to capture the title (through 2020).

— The Junior Golf Alliance of Colorado, a joint effort of the CGA and the Colorado PGA, formally debuts.