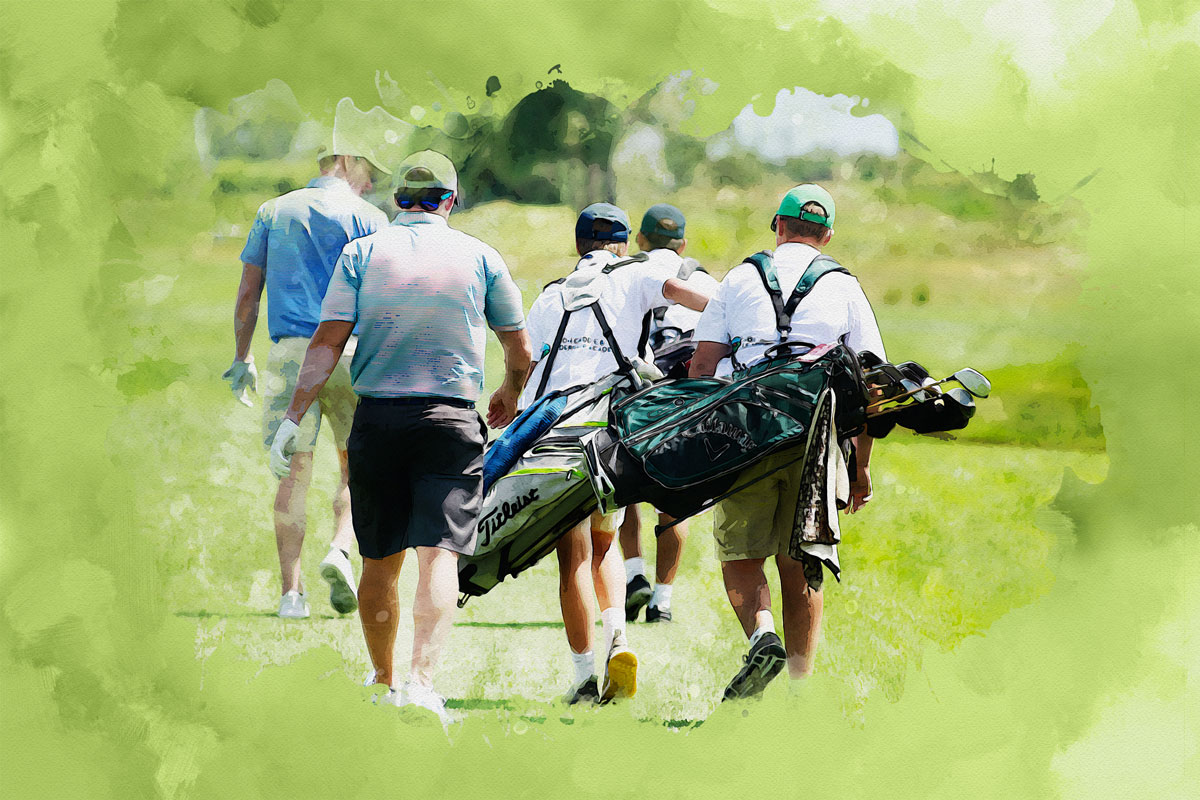 Kids from the Solich Caddie & Leadership Academy go about their business at CommonGround GC.

If anything teaches a newly minted teenager the importance of being on time — or preferably early — the old caddie draw at Columbine Country Club certainly did.

At least in my case.

Back in the day, the weekend caddie draw at Columbine took place promptly at 7 a.m. John Schiel, the club’s caddiemaster back then, would come down to the caddie bench behind the ninth green, holding a container full of bag tags, each having a number on it.

The caddies would take turns selecting tags/numbers and would get a loop in order of the number he or she drew — i.e., you’d go out first if you picked No. 1, or 40th if you selected No. 40. And, if you didn’t arrive on time for the draw, you went to the back of the line, meaning you might be sitting and waiting on the caddie bench for three or four hours before going out — or you might sit there for all that time and not get out at all.

Hence, you better arrive early, even it it meant starting the bike ride from your house to the course at 6:15 or 6:30 a.m.

I bring all this up because I was reflecting on those days — back in the mid-1970s in my case — quite a bit recently. I was very fortunate to have been inducted into the Colorado Golf Hall of Fame — with the induction taking place, appropriately in my case, at Columbine. And, in preparing a speech, it truly sunk in how much those days of caddying influenced the course my life in general — especially professionally speaking.

As a youngster, I was far more into tennis and soccer than I was golf. But caddying presented a rare opportunity to make some consistent money for a kid younger than 16. My dad had been a caddie during the Depression at Omaha Field Club, and it was suggested (OK, he just plain told me to do it) that I follow suit.

Caddying subsequently led to a couple of other golf-related jobs at Columbine — working in the bag room, retrieving member’s bags and washing their clubs after rounds; then as the caddiemaster and starter at the club. It was during that period that Columbine’s PGA head professional at the time, Tony Novitsky, was kind enough to set me up for the loop of a lifetime — caddying for my favorite player, Jack Nicklaus, in a 1981 exhibition he played with Tom Watson and Dow Finsterwald at Pinehurst Country Club.

Perhaps most importantly, caddying as a teenager led to the amazing good fortune of receiving an Evans Scholarship to the University of Colorado, where I lived with other caddies and developed lifelong friendships and relationships. And that paved the way to a career as a sports writer, with one of my main beats over the decades being golf. And that presented opportunities to meet so many amazing people in the sport, many of whom have played prominent roles in stories over the years.

And, I should add, all three of my daughters also went down the caddying path —  in their case at Boulder Country Club — making it three generations worth of loopers in the family. They also were lucky enough to become Evans Scholars at CU.

In all likelihood, all that falling of the dominoes never would have happened had I not taken those early morning bike rides over to Columbine for the caddie draws way back when.

Caddying itself teaches so many valuable lessons — some directly and some through a kind of osmosis. As noted, it trains you to be on time and teaches the value — monetarily and otherwise — and satisfaction of hard work and perseverance. Beyond that, caddies learn — if they didn’t already know — how to be courteous, and how to effectively interact with adults other than their parents, teachers, neighbors, coaches and the like. And that just scratches the surface of the lessons.

It also certainly helps to have good guidance — as well as a great example — set by golfers and de facto supervisors at the course. Some of those who set just such an example during my time at Columbine were the aforementioned Tony Novitsky, assistant pros such as Jack Sommers and Rick Cole, and caddiemaster John Schiel, who earned an Evans Scholarship himself and helped set me on the track to receive one myself.

Golfer-wise, the first person who comes to mind back in those days for me was Dr. Bob Brewka, a dentist who was good enough to often request me for caddie duties. He was a very nice man who would engage a caddie in conversation and seemed genuinely interested in his looper. And it certainly didn’t hurt that he paid well — $20 per round normally, no small amount back then for a 13- or 14-year-old.

Of course, there were also a few people who were blowhards, but you learned something from them too — things that might be useful when you ran into other such people as adults.

In short, from my experience anyway, caddying often provides a nice head start to learning about life in general.

In my case, I couldn’t be more grateful for the path on which caddying steered me nearly 50 years ago. I never could have foreseen how such a seemingly simple thing as carrying golf clubs and helping a player have a more enjoyable round could have had such a strong impact on my life. It’s amazing how one thing leads to another and another, and only in retrospect can the full path back to the very beginning be fully appreciated.

So, thank you caddying. I owe you so much. Those summers spent looping at Columbine paid dividends that have lasted a lifetime. Even at my age, I’m sure the lessons from those days will continue being taught well into the future.

And for what it’s worth, I can still kind of feel that brisk early-morning air blowing in my face from bike rides for those caddie draws at Columbine.