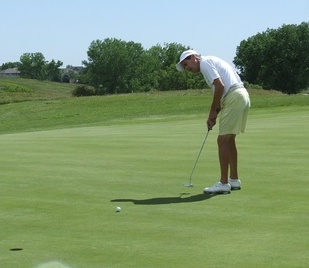 On a day when defending champion John Hornbeck punctuated an 8-and-7 rout with a hole-in-one, two of the top six seeds fell in Tuesday’s round of 32 at the 50th CGA Senior Match Play at Meadows Golf Club in Littleton.

The round of 16 was also scheduled to be held on Tuesday, but a lightning delay of about three hours led to that being postponed until Wednesday. Now, the round of 16 and the quarterfinals are set for Wednesday, and the semifinals and the final for Thursday.

Hornbeck, a member of the Golf Hall of Fame in Wyoming who captured the 2018 Senior Match Play title, won his second straight lopsided match, this time defeating Greg Otto of Indian Peaks Golf Course, 8 and 7. The final competitive shot struck in that match was the ace that Hornbeck scored on the 11th hole, which measured about 170 yards. A day earlier, Hornbeck had won his opening-round match by a 7-and-6 margin.

Though seven of the top 10 seeds have advanced to the final 16, ousted on Tuesday was Colorado Golf Hall of Famer and sixth-seeded Kent Moore of Cherry Hills Country Club. Thomas Roos of Spring Valley Golf Club, who teamed up with Denny Fields to win the CGA Senior Four-Ball in early May, defeated Moore, 3 and 2.  And Jim Reynolds of Bear Creek Golf Club beat second-seeded Keith Atkins of Highland Meadows Golf Course, the 2017 CGA Senior Player of the Year, 2 and 1.

Also among those moving on is 2018 runner-up Steve Ivan of Patty Jewett (1 up); Scott Sullivan of Bookcliff Country Club, who made it to the round of 16 at last year’s U.S. Senior Amateur (5 and 3); and Sean Forey of The Club at Rolling Hills, the 2019 CGA Super-Senior Match Play champ (2 and 1).

The Senior Match Play is limited to players 53 and older.