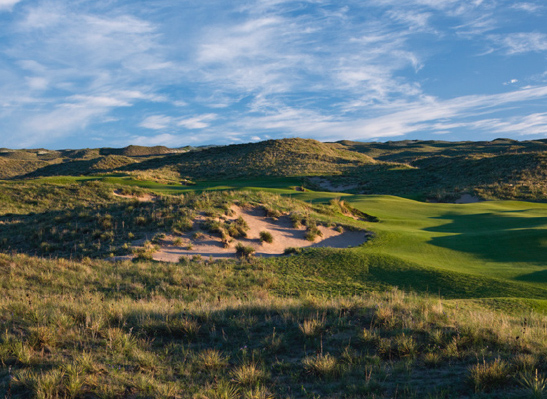 Distinctive Ballyneal in Holyoke checked in at No. 34 among the top courses in the U.S.

Golf Magazine’s biennial list of the top courses in the U.S. may not be the oldest such national rankings — that honor goes to Golf Digest’s “America’s 100 Greatest Golf Courses”, which debuted in 1966 — but it is nevertheless well-respected.

The latest edition, published this week by Golf.com, features two Colorado courses among the top 100 in the country. One of them — Ballyneal Golf Club in Holyoke — is a 21st-century, well-off-the-beaten-path creation of Tom Doak. The other — Cherry Hills Country Club in Cherry Hills Village — dates back to 1922 and is arguably Colorado’s most well known course, having hosted five of the six men’s open-age major championships ever held in the Centennial State, and nine USGA championships.

Here’s what Golf.com had to say about the two Colorado courses:

34. Ballyneal: “Founding a private club in a remote destination is not without peril and it is reasonable to expect a club to take some time find its footing. Now in its second decade, and courtesy of a new greenkeeper, Ballyneal enjoys its best playing conditions since opening. With the greens now Stimping in the 10 to 10.5 range, balls are releasing across the rumpled ground and players are delighting in finding creative ways to use banks and punchbowl features to work their shots close. Fescue fairways help the ground-game options flourish.”

100. Cherry Hills: “When it opened in the early 1920s, Cherry Hills was a ground-breaking design that featured America’s first par-5 island green. Today, the Denver club is best-known for the thrilling 1960 U.S. Open, when Arnie fired a 65 on the final day to take out an aging Hogan and a young Nicklaus. The 2023 U.S. Amateur will likely only further enhance this classic William Flynn layout’s reputation for hosting big events while remaining a joy for its members to play. While much of (William) Flynn’s work is clustered around Philadelphia, this design stands out as one of the few he did west of the Mississippi River.”

Also this week, Golf.com posted its top 50 courses in the different regions of the country. In the West, Ballyneal and Cherry Hills were joined in the top 50 by 2019 U.S. Mid-Amateur Championship host Colorado Golf Club in Parker, former International venue Castle Pines Golf Club and the West Course at The Broadmoor in Colorado Springs.

Here’s a look at Golf.com’s top courses — overall and from Colorado — both nationally and regionally:

48. West Course at The Broadmoor in Colorado Springs