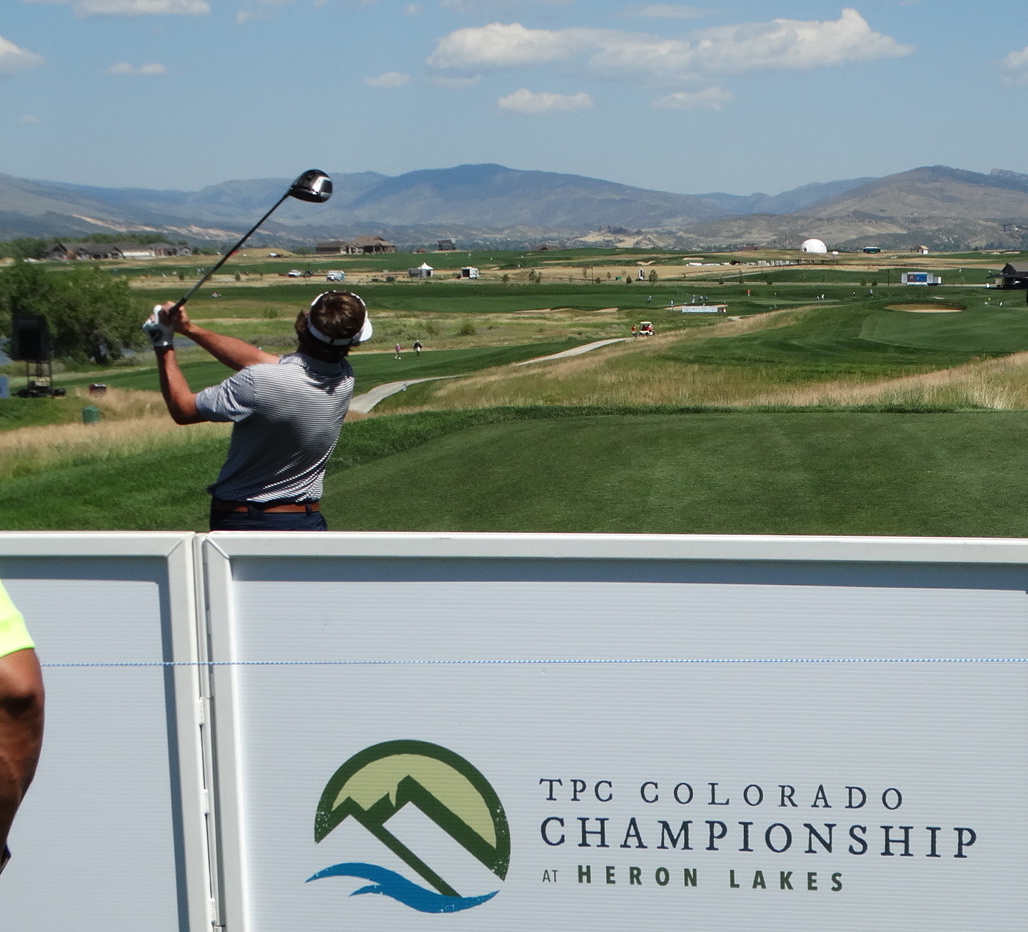 The view from behind the first tee at last year's inaugural TPC Colorado Championship at Heron Lakes.

Last year, the inaugural TPC Colorado Championship at Heron Lakes in Berthoud drew an estimated 20,000 spectators for the week.

The second time the event is scheduled, it will draw none — at least from the general public.

The Korn Ferry Tour announced changes to its schedule and additional operational details on Monday as it deals with the effects of the novel coronavirus. And two things will have a major effect on the TPC Colorado Championship:

First, the event will be moved up a week on the 2020 schedule, with the tournament itself now being played over Independence Day weekend — July 2-5 to be exact. It was originally scheduled to finish on July 12.

“We know the special role our tournament plays in the community by bringing professional golf to Colorado on an annual basis,” TPC Colorado Championship tournament director Drew Blass said in Monday’s release. “We are saddened in not being able to invite our surrounding neighbors, but our main focus remains keeping our community safe.”

Littleton resident Jim Knous, a PGA Tour regular in 2018-19 who is on a medical extension following right wrist surgery, said on Monday he plans to make the TPC Colorado Championship one of his Korn Ferry Tour “rehab starts” en route to his return to the PGA Tour.

The TPC Colorado Championship will be the fourth event on the upcoming Korn Ferry Tour revised schedule that was announced on Monday. The season will resume June 11-14 with the Korn Ferry Challenge at TPC Sawgrass at Ponte Vedra Beach, Fla. The Colorado stop will follow the Utah Championship, which will conclude June 28 in Farmington. In all, barring further changes, 23 KF Tour events will be contested in 2020, including five in September and October after the Korn Four Terry Championship, which previously was the season-ender.

Normally, the top 25 finishers on the Korn Ferry Tour’s regular-season points list and the top 25 from the KF Tour Finals series earn PGA Tour cards for the following season. But that will not be the case this year given all the PGA Tour and Korn Ferry event cancellations. That resulted in the PGA Tour announcing last week that exempt PGA Tour members for the 2019-20 season will remain exempt in 2020-21.

Now, with the changes, the top 10 on the Korn Ferry points list following the KF Tour Championship will earn spots into all the 2020-21 PGA Tour “additional events” — those played the same week as higher-profile PGA Tour tournaments. Then the 2020 and ’21 Korn Ferry Tour seasons will be combined, with 50 players earning 2021-22 PGA Tour cards — 25 following the 2021 KF regular season and 25 more after the 2021 KF Tour Finals.

In addition, Korn Ferry Tour Qualifying School for 2020 has been canceled.

Meanwhile, in other changes to the Colorado golf schedule and scene for coronavirus-related reasons:

— The Junior Golf Alliance of Colorado, which originally was scheduled to start its tournament season in early April, will now begin in early June.

Since the initial cancellations were announced, the first JGAC events had been set for the week of Memorial Day. But the JGAC board of directors decided to move the start back a week, with its first 2020 tournaments now scheduled for June 2. The first JGAC Tour event of the year will be June 2-3 at The Broadlands Golf Course in Broomfield.

Six events had been scheduled for Memorial Day week, and they’ve now been postponed or canceled. For the complete list of JGAC cancellations and postponements, CLICK HERE.

— Four City of Aurora golf courses that had been closed during much of the pandemic will reopen this week. Saddle Rock, Meadow Hills and Aurora Hills golf courses will make their spring debuts on Wednesday (May 6), with Springhill following suit on Friday. Murphy Creek remains closed. All the Aurora courses that will reopen will be walking-only and golf shops will be closed to the public.