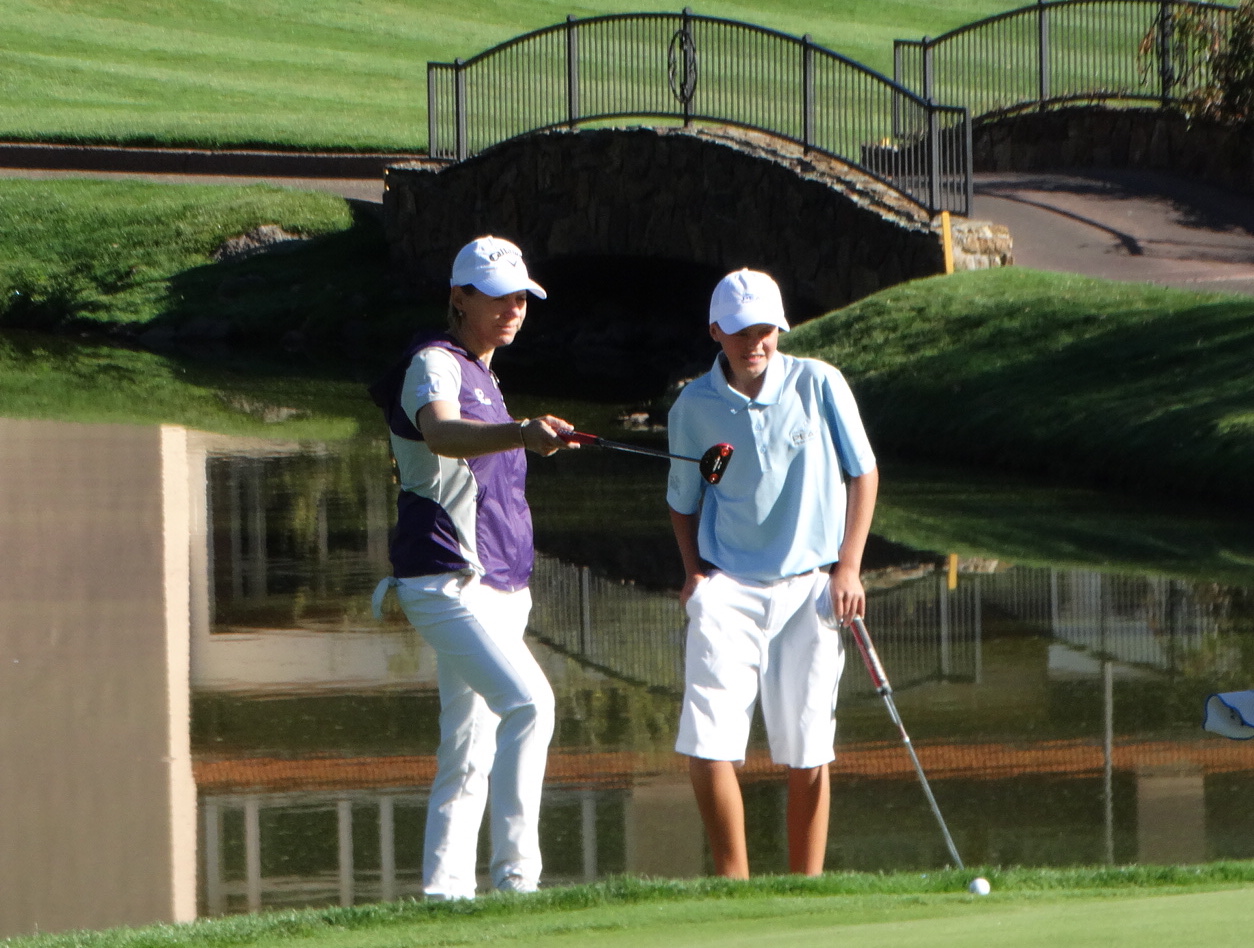 The top stories of 2018 in Colorado golf, Part I

Each year has its own distinctive makeup. That’s true regarding life in general, or in Colorado golf.

Since 2009, we’ve made it an annual habit to go back through the golf stories of the year, pick out the most prominent ones and rank them for a retrospective on the CGA website.

For most of the last several years, we’ve broken the list into two installments to keep things a little more manageable. We go in reverse order, for the sake of suspense, and add an honorable-mention list that will be included with Part II, which will be published in the coming days.

So, without first ado, here’s our 10th edition of Colorado golf-related stories of the year:

25. Second Colorado Topgolf Site Gearing Up: Since August 2015, there’s been one Topgolf location in Colorado — the one in Centennial. But three months ago, ground was broken at a second site — at I-25 and 60th Ave., in Thornton. The 65,000-square-foot, three-level facility is scheduled to open to the public in late 2019. It will have 102 climate-controlled hitting bays — where players hit microchipped golf balls at targets with varying point values — in addition to a restaurant and three bars. There will be 250 HD televisions, a rooftop terrace with fire pits and 3,000 square feet of space devoted to private events. The Centennial Topgolf employs about 500 people, the same number that is expected in Thornton.

24. Annika Returns to Colorado for First Tee Event: Over the last three years, the folks who run the CoBank Colorado Open Championships and The First Tee of Green Valley Ranch have brought in tour players to conduct exhibitions and chat with kids from The First Tee programs in the state. During the first two years, doing the honores were Hale Irwin, Ryan Palmer, Paula Creamer, David Duval, Lexi Thompson and Mark O’Meara. This year, there was no letdown in talent as Matt Kuchar came for a late June exhibition at GVR, and World Golf Hall of Famer Annika Sorenstam (above) for a CoBank PEAK Performers event in August at The Broadmoor, where Sorenstam won her first LPGA title — the 1995 U.S. Women’s Open. The PEAK Performers event was particularly unique as nine kids from First Tee programs around the country had the opportunity to play golf with Sorenstam for six holes each as part of a four-day, all-expenses-paid outing. READ MORE

23. Sibling Sweep for Bryants: A year after Davis Bryant and younger sister Emma completed the “Bryant Slam” by jointly winning all four Junior Golf Alliance of Colorado majors in 2017, they posted a “Sibling Sweep” when they prevailed at both the boys and girls 5A state high school tournaments in the same school year. Almost eight months after Davis Bryant claimed the 5A boys crown as a senior at Eaglecrest, Emma held up her end by capturing the 5A girls title as an Eaglecrest freshman in May at Boulder Country Club. It’s the first time two players with the same surname have won the boys and girls state individual prep championships in one school year. READ MORE

22. High Honor for Irwin: Hale Irwin (left) had to contend with Jack Nicklaus on the golf course plenty of times over the course of their careers. But in June, it was Nicklaus and the Captains Club that honored Irwin — a three-time U.S. Open champion and World Golf Hall of Famer who grew up in Boulder — as the 2018 Memorial Tournament honoree. And it’s no small tribute. Others who have received similar status since 2010 include Seve Ballesteros, Nancy Lopez, Tom Watson, Ray Floyd, Annika Sorenstam, Nick Faldo, Johnny Miller and Greg Norman. “I have a hard time putting myself in that category with the greats of the past, so I am absolutely delighted.” Irwin said.

20. 25 and Counting for Eaton: Colorado Golf Hall of Famer Kim Eaton wasted no time in 2018 tying Carol Flenniken’s record for career CGA/CWGA women’s titles. In May, she teamed with fellow Hall of Famer Janet Moore in winning the Brassie Championship, giving her 25 such victories in her career. Though Eaton came up short — in a playoff — of notching No. 26 at the CGA Women’s Senior Stroke Play at her own home course at Greeley Country Club, she’ll have additional opportunities at the outright record in 2019. READ MORE

19. Spiranac Continues to Make a Splash: It’s hard to fathom how big a social media sensation 2015 CGA Women’s Match Play champion Paige Spiranac has become. At last check, the former Colorado resident had 1.5 million followers on Instagram and 215,000 on Twitter. Before largely giving up competitive golf, Spiranac not only won the 100th CWGA Match Play, but finished ninth in the 2016 CoBank Colorado Women’s Open and won the 2010 CWGA Junior Stroke Play as well as the 2006 CJGA Tournament of Champions — all in Colorado. Spiranac, who appeared in the 2018 Sports Illustrated Swimsuit Issue, is now a periodic columnist for Golf.com. READ MORE

18. 25 Years and Counting for Denver Golf Expo: What started out relatively modestly at the Colorado Convention Center in the early 1990s has turned into quite an annual affair. In 2018, the Denver Golf Expo, now run by Mark and Lynn Cramer, celebrated its 25th anniversary. The Cramers, who bought the show from Colorado PGA professional Stan Fenn in 2000, will be honored in June by the Colorado Golf Hall of

16. And Love-ing It: After getting advice from World Golf Hall of Famer Davis Love III, son Dru (left) made an eagle in a playoff to win the CoBank Colorado Open. The younger Love carded an eagle and nine birdies in his final 19 holes of the tournament. It was the biggest win of Dru Love’s career, and he made $100,000 in the process. Davis Love III won the PGA Tour’s International twice in Colorado, while Davis Love II claimed the title in the CGA Junior Match Play in both 1953 and ’54. READ MORE

15. Kevin Stadler, Kaye Make Long-Awaited Returns to ‘The Show’: The year 2018 marked the return to PGA Tour action for two Colorado-based veterans who hadn’t competed in golf’s top circuit for quite a while. Part-time Boulder resident Jonathan Kaye, a two-time PGA Tour winner, had last played in a PGA Tour event in 2011, but in March he landed a spot in the Corales Puntacana Resort & Club Championship, where he missed the cut. And part-time Denver resident Kevin Stadler, who hadn’t competed on the PGA Tour since 2015 due to a broken hand, returned for the Sanderson Farms Championship in October, but likewise missed the cut. Stadler is expected to be a regular in PGA Tour events in 2019 as he plays on a major medical extension.

14. ‘Youth on Course’ Debuts in Colorado: A year ago, CGA executive director Ed Mate predicted that the Youth on Course program could become a “game-changer for player development” in Colorado. The initiative, which makes golf more accessible to juniors by capping their cost for a round at $5 at participating facilities, came to Colorado in 2018. Fifteen Colorado courses participated this year, and many more are expected to be on board in 2019. READ MORE

13. Web Tournament Formalized for TPC Colorado: Colorado last hosted an open-age PGA Tour-affiliated event in 2014, when the BMW Championship PGA Tour playoff tournament was held at Cherry Hills Country Club. But in a September announcement, the Web.com Tour confirmed what had long been known — that a Web.com Tour event would be conducted at the new TPC Colorado course (left) in Berthoud for at least five years, starting in 2019. The event, known as the TPC Colorado Championship at Heron Lakes, will debut the week of July 8-14, with 156 players competing for a $600,000 purse. The Web circuit — then known as the Nike Tour — previously had a tournament in Colorado in 1996 and ’97, when Riverdale’s Dunes Course in Brighton hosted the Nike Colorado Classic. READ MORE

Also on the subject of new courses in Colorado, Fred Funk said in late June that the Raindance National Golf Club course in Windsor that he’s co-designing may open as soon as the fall of 2020.