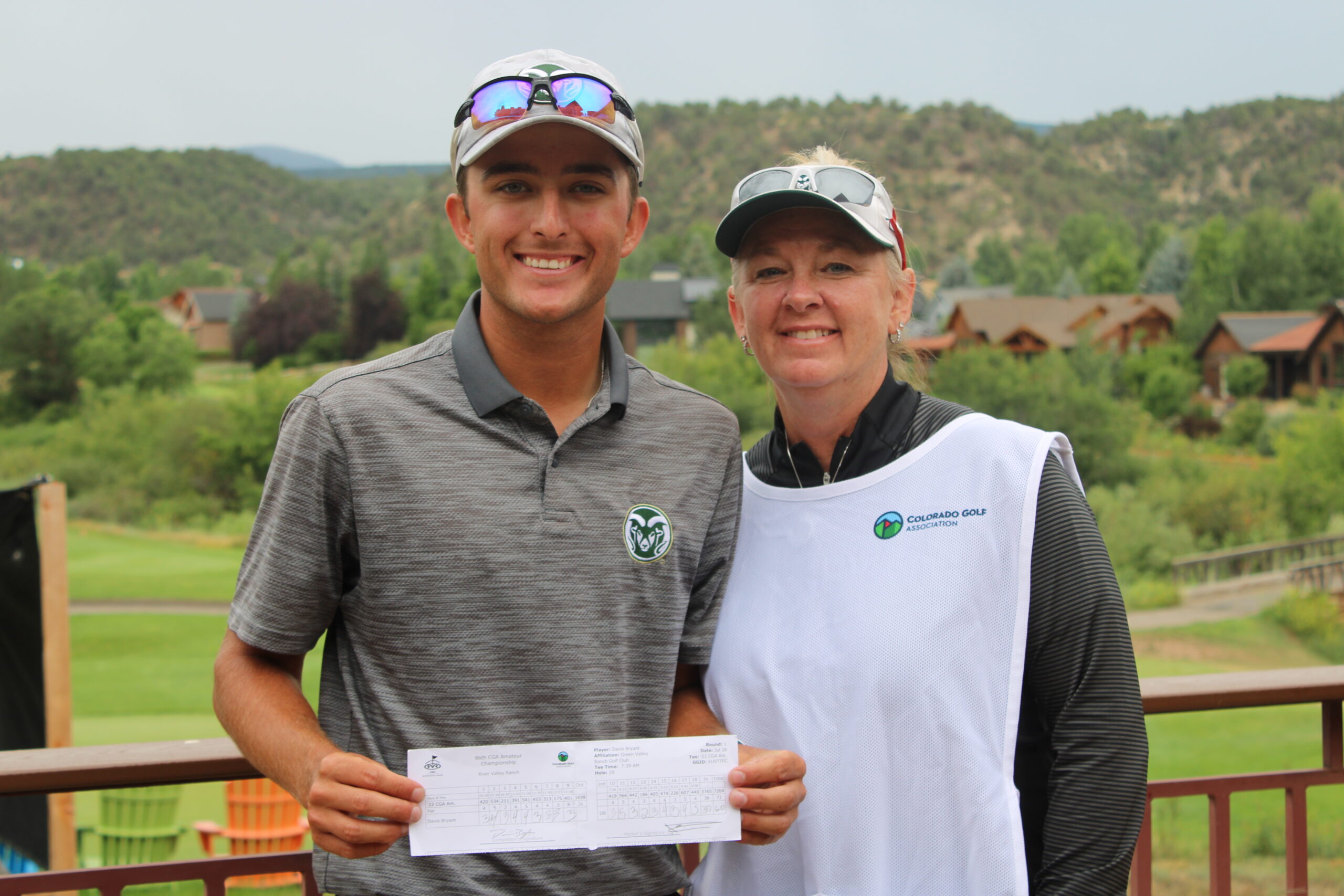 Davis Bryant with his mom/caddie, Julie.

12-under-par round (60) by Davis Bryant believed to be the lowest, relative to par, in the long history of the CGA Amateur

The CGA Amateur Championship dates back to at least the 1930s, though it’s been known by different names, including the CGA Stroke Play.

Among the tournament champions over the years are a World Golf Hall of Famer (Hale Irwin, a three-time winner), other longtime PGA Tour players (Steve Jones, Bob Byman three times, Brandt Jobe and Wyndham Clark), along with many Colorado Golf Hall of Famers besides the four aforementioned.

But on Thursday, another past champion is believed to have done what no one else has in the history of the CGA Amateur: post a 12-under-par round during the event.

While records for the championship are certainly not complete, particularly when going back to pre-1977, it’s a good bet that Davis Bryant of Green Valley Ranch Golf Club, in shooting 12-under 60 on Thursday at River Valley Ranch in Carbondale, set a single-round record for the CGA Amateur, relative to par.

The Colorado State University golfer made 12 birdies — including one on his final hole, No. 9 — and no bogeys in his opening round to take a six-stroke lead in the 72-hole event, which runs through Sunday.

Bryant, the 2019 CGA Am champ who last month won the Southwestern Amateur, said it was his personal best score by two strokes, and his best in tournament play by three shots.

“Today’s round was incredible,” the 22-year-old said in a text. “It was one of those days where everything felt spot-on and dialed-in. I was fortunate enough to play with (2015 CGA Match Play champ) Nick Nosewicz and (former European Tour player) Matthew Zions, which made the day awesome and we definitely kept feeding off one another. (Nosewicz fired a 66 and Zions a 70.) Super happy to get off to a great start in the championship and looking forward to the next few days!”

It should be noted that while Bryant may well have set a CGA Amateur record for a single-round score relative to par, he matched what is believed to be the championship’s all-time low score, regardless of par. In the 2010 CGA Am, Jim Knous rallied from 10 behind going into the final day to shoot a 10-under-par 60, breaking the Boulder Country Club course record held by Irwin, Trey Maples, BCC director of golf Kevin Bolles and former assistant professional Mark Trauner. Knous forced a playoff, but the-then-16-year-old Clark won with a birdie on the second hole of a sudden-death playoff.

(Coincidentally, Knous grew up less than 12 miles away from River Valley Ranch, in Basalt.)

In all, 28 players out of the 83-man field broke par, including Connor Jones of The Ranch Country Club, who won the 2022 CGA Match Play and recently finished third overall at the Inspirato Colorado Open. Jones carded an eight-birdie 68 on Thursday.

The field will be cut to the low 40 players and ties after Friday’s second round.

Though historical information about CGA Amateur venues isn’t complete, River Valley Ranch is believed to be the furthest west the championship has ever been contested.