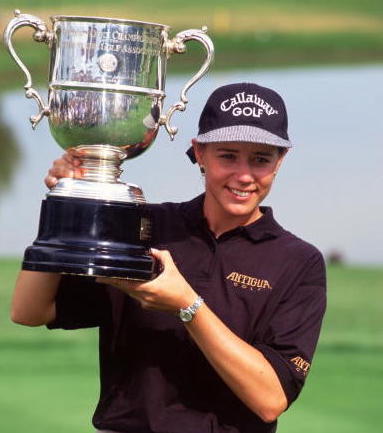 Annika Sorenstam's win at The Broadmoor in 1995 marked her first LPGA title and the first of her 10 major victories.

Over the decades, Colorado has produced some of the most memorable U.S. Opens, U.S. Amateurs, U.S. Senior Opens and U.S. Women’s Amateurs in history.

Just to name a handful:

— The 1960 U.S. Open at Cherry Hills remains one of the most compelling Opens ever as three of golf’s all-time greats, each from a different generation — Jack Nicklaus, Arnold Palmer and Ben Hogan — were in contention down the stretch. Palmer’s final-round 65 lifted him from seven strokes out of the lead going into the final round to his only U.S. Open victory.

— At the 1959 U.S. Amateur at The Broadmoor, a 19-year-old Nicklaus defeated amateur great Charlie Coe in the 36-hole final, 1 up. It marked the first of Nicklaus’ eight USGA titles en route to becoming arguably the top golfer of all time.

— At the 1990 U.S. Amateur at Cherry Hills, Phil Mickelson won his only USGA title to date. Mickelson was inducted into the World Golf Hall of Fame in 2012.

— The 1993 U.S. Senior Open at Cherry Hills marked the last of Nicklaus’ eight USGA victories as he prevailed by a stroke over fellow former Ohio State golfer Tom Weiskopf.

— The 1982 U.S. Women’s Amateur at The Broadmoor also had a future World Golf Hall of Famer as a champion as Juli Inkster won her third straight Women’s Am, which remains tied for the record in the event.

Meanwhile, with this week marking the 75th playing of the U.S. Women’s Open — it begins Thursday in Houston — Golf Digest recently ranked the 18 most memorable USWOs. And, not surprisingly given the other great major USGA championships Colorado has produced, the Centennial State featured prominently in the Golf Digest rankings.

By the way, since one of the reason’s for Golf Digest writing the story was that this year marks a milestone — as it’s the 75th U.S. Womens’ Open — it should be noted that the two ranked USWOs in Colorado also fall into that milestone category. The ’95 championship at The Broadmoor was the 50th U.S. Women’s Open, and the 2005 event at Cherry Hills was the 60th.

Here’s what Golf Digest wrote about those two tournaments:

“9. Annika begins her reign (1995): Big things were expected from (Annika) Sorenstam after she became the first international player to win the NCAA title in 1991 and finished runner-up at the 1992 U.S. Women’s Amateur. But after joining the LPGA in 1994, she had failed to post a victory prior to arriving at The Broadmoor, and didn’t look as though she would do it in Colorado, either, entering the final round trailing leader Meg Mallon by five. But Sorenstam closed with a 68, Mallon a 74 and Annika had the first of her 72 LPGA victories and 10 majors.

“7. The ultimate birdie for Birdie (2005): Morgan Pressel, then a 17-year-old high schooler, was trying to accomplish the improbable at Cherry Hills Country Club in Denver and become the second amateur to win the Women’s Open—and the youngest-ever winner of a major title. She was tied for the lead on the 72nd hole, standing in the fairway and watching the other co-leader, Birdie Kim, play her third shot on the par 4 from a greenside bunker. The 23-year-old South Korean proceeded to shock everyone—particularly Pressel—when she holed the tricky sand shot for a birdie. “I was never a good bunker player,” Kim said. “Finally, I make it.” Pressel couldn’t regroup, bogeying the hole to allow Kim to win by two, her only LPGA victory.”

In the No. 1 slot on the Golf Digest list was the 1964 U.S. Women’s Open where Mickey Wright captured her fourth USWO title at San Diego Country Club.

Tee Times and TV: Colorado-born-and-bred golfer Jennifer Kupcho will tee off at 9:59 a.m. (MT) for Thursday’s first round of the 2020 U.S. Women’s Open in Houston. For the entire list of tee times, CLICK HERE.