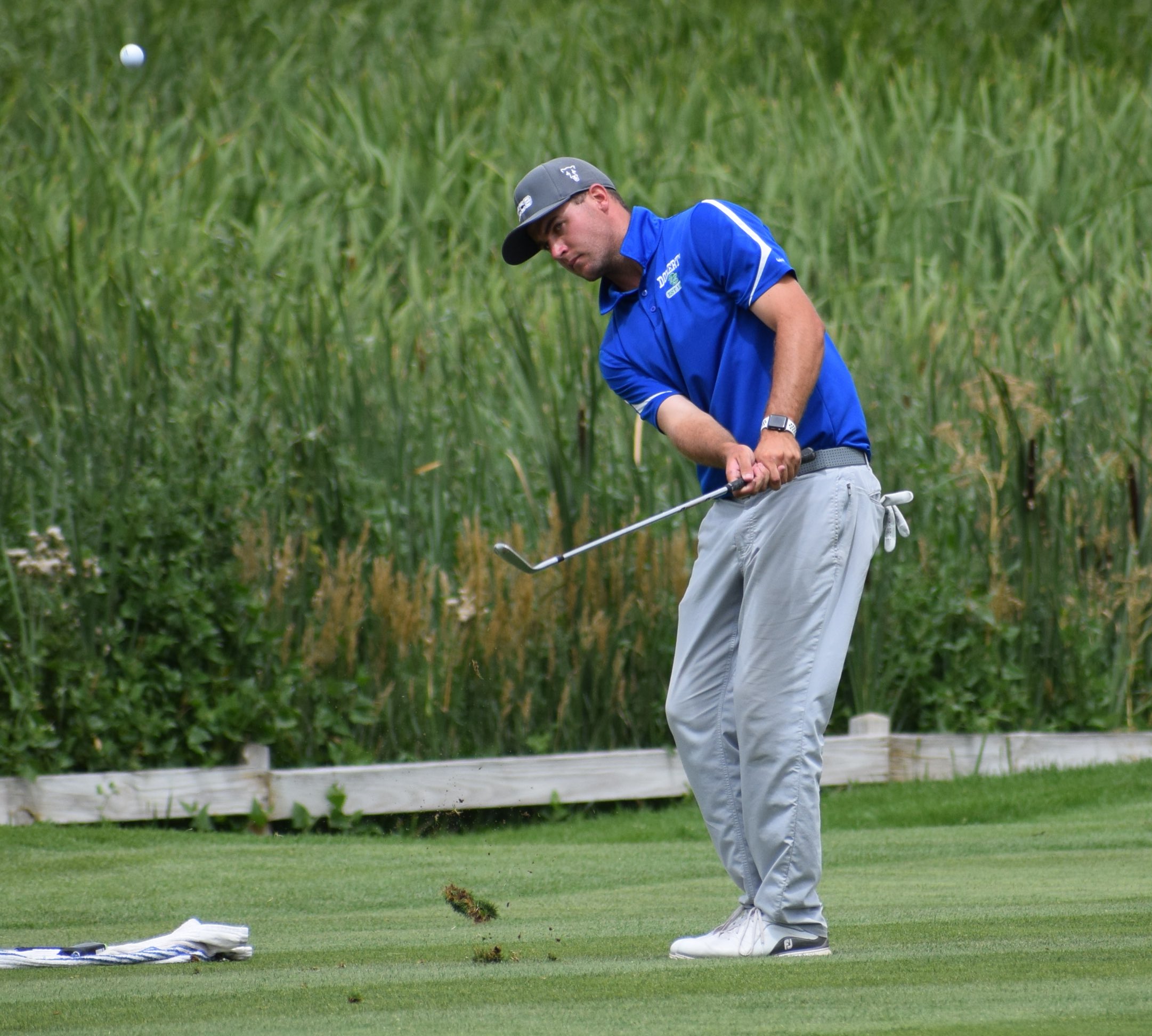 Colin Prater won the CGA Match Play and the CGA Amateur, and was low-amateur in the CoBank Colorado Open.

In a year which produced several rare feats in CGA championships, it seems only appropriate that the naming of the CGA players of the year should follow suit.

On the men’s side, there are these oddities:

— The CGA Les Fowler Player of the Year and the Mid-Amateur (25 and older) Player of the Year is the same person, Colin Prater of Cherokee Ridge Golf Course in Colorado Springs. Since a Mid-Amateur POY started being named in 2008, Prater is just the second golfer to claim both honors in the same year. Michael Harrington, also a Colorado Springs resident, landed both awards in 2014.

— In winning both of the CGA’s two majors — the Amateur and the Match Play — in 2020, Prater became the first mid-amateur to pull off that single-season sweep since Gary Longfellow in 1974.

— On another level, Steve Ivan of Patty Jewett Golf Course, another golfer from Colorado Springs, landed the CGA Senior Player of the Year award for the second time in three years. The last person to be named CGA SPOY more than once was David Delich of Colorado Springs (2012 and ’15).

— A little more than half a year after moving to Colorado from Reno, David Nelson of Columbine Country Club was named the CGA Super-Senior Player of the Year, for players 64 and older.

Here’s a look at the 2020 seasons for each of the CGA’s men’s players of the year:

— Colin Prater of Cherokee Ridge GC, CGA Les Fowler Player of the Year and CGA Mid-Amateur Player of the Year: Prater, a 25-year-old science teacher and girls golf/boys JV basketball coach at Doherty High School, entered rarefied air in 2020 by winning both of the CGA’s majors, the Match Play and the Amateur, in the same year. That had been done just once since 1985, when Brandt Jobe pulled off the feat. Jobe is now a Colorado Golf Hall of Famer who has won twice on PGA Tour Champions. Steve Ziegler pulled off his CGA sweep in 2009, and Prater joined in the fun this year.

“The goal obviously was to try to win every single event, but the main goal this summer was to try to win the Match Play No. 1,” Prater said. “Fortunately, I was able to accomplish that, then I rode that momentum for the rest of the summer.

“I’m very honored to be in the same realm as (Jobe and Ziegler). Then my brain looks to try to do it again next year. How can we repeat that? I’m not trying to dishonor any of those other players — there’s tons of really good players in the state — but my goal is to always get better. So, I’ll try to go three-peat next year (in the next CGA major), put the pieces together again and go play solid.”

The former University of Colorado-Colorado Springs golfer put together a dominant performance at the 120th CGA Match Play at Blackstone Country Club in June. Just how dominant was he? Prater shared stroke-play medalist honors — with Dillon Stewart of Ptarmigan Country Club — by shooting a 4-under-par 68, then trailed in just one of his six matches — that being 1 down on the front nine against Charlie Sahlman of Cherry Creek Country Club in the quarterfinals.

With an 8-and-7 victory in the scheduled 36-hole final over CU golfer Ross Macdonald, Prater became just the third mid-amateur in the 21st century to capture the Match Play title, joining Irwin (2004) and Nick Nosewcz (2015). The margin in the final was the third-largest in the Match Play final since 1990.

A month later, Prater added another nice notch in his belt by landing low-amateur honors in just his second time competing in the CoBank Colorado Open. In doing so, Prater became the first mid-am since Irwin in 2006 to be low-Am at the Open. Prater was the low am after all four rounds at Green Valley Ranch Golf Club, finishing at 12 under par and tying for 34th place overall.

The next week, in early August, Prater finished strong at the CGA Amateur to win by six strokes over defending champion Davis Bryant at CommonGround Golf Course. After opening with an even-par 70, Prater went 66-65-66 to card a 13-under-par total.

With that, Prater became the first player since Longfellow in 1974 to win both CGA majors and be low-am in the Colorado Open in the same year. (Longfellow won the Open outright 46 years ago, becoming the first amateur to do so.)

In other accomplishments, Prater was the first mid-amateur since Jonathan Marsico in 2008 to win the CGA Amateur, and he posted the largest margin of victory at the event since 2003.

It was the second CGA Amateur title for Prater, who also won in 2016 at Boulder Country Club. He became the first two-time champ in the event since Webber in 2002 and ’03.

Prater returned to teaching roughly a week after winning the CGA Amateur, but still managed to post another victory thereafter — at the Colorado Springs City Championship in early September, when he prevailed by six.

“I played real solid and got the job done in some high-profile events,” said Prater, noting he made a putter switch early in the season that helped his cause. “Everything just clicked. My game came out of the winter in good shape and I was able to put together a lot of solid rounds this summer.

“For the most part, it was a lot of hard work. I was free all summer and was able to work on my game more — and earlier than usual — because of the pandemic. I was able to step back from teaching and go hit golf balls if it was nice out in March and April. Being able to refine my game earlier than expected allowed for success. And I was able to simplify the game a little bit and keep up my solid play.”

Prater, a two-time qualifier for the U.S. Amateur, also competed in the CGA Mid-Amateur for the first time, but a balky putter led to a 10th-place finish in mid-September. Oh, and Prater did post another win in 2020, though not quite of the same stature. He said he and partners won the Cherokee Ridge three-man scramble tournament, shooting 57-55.

Given all he accomplished in 2020, it’s no surprise that Prater was named the Colorado Golf Hall of Fame’s Golf Person of the Year for 2020.

“My next massive goal — and I understand it’s a huge undertaking — would be to go try to win a U.S. Mid-Am,” Prater said. “I don’t know if I’m quite there yet — I definitely need to be a better putter and have a better mentality on the greens — but that’s the goal. Over the next couple of years, that’s where my eyes see it.”

Prater said he’ll also look to play in some different events moving forward, possibly starting with the CGA Four-Ball Championship in the spring. He’d also like to represent the CGA again at a Pacific Coast Amateur.

“I’m just trying to get a new experience and play in something a little bit new and different and go challenge myself and see if I can get a little better,” he said.

— Steve Ivan of Patty Jewett GC, CGA Senior Player of the Year: Ivan has been a model of consistency at CGA senior championships in recent years. And when we say consistency, we’re talking being consistently in contention — without fail.

Those last two indicate Ivan swept the CGA senior major titles in 2020, winning the Senior Match Play and the Senior Amateur, both limited to players 54 and older this year. It was the first time a player won both CGA senior majors in the same year since Harry Johnson in 2013.

Combined with his victory in the 2017 Senior Amateur, Ivan now owns three CGA senior major championships to go along with the CGA Junior Match Play he won in 1979.

In both the Senior Match Play and the Senior Amateur, Ivan overcame Polk in “overtime” for the titles.

At the Senior Match Play at Highland Meadows, Ivan competed in the final for the third straight year, this time prevailing over Polk in 20 holes after being 4 down through six holes. The victory came just six days after Ivan’s mom passed away, and he dedicated the win to her.

Early in the fall, Ivan completed the senior sweep at Perry Park, where defending champion John Hornbeck would have won the title had he and his playing partner not played each other’s balls on the 13th hole of the final round. As it turned out, Ivan and Polk again ended up knotted at the top after regulation, and Ivan prevailed by draining a 3 1/2-foot birdie putt on the first hole of sudden death.

Beyond his stellar play in CGA senior majors in 2020, Ivan proved capable of competing with the young guys when he finished 22nd in the CGA Amateur at CommonGround.

— David Nelson of Columbine CC, CGA Super-Senior Player of the Year: Nelson didn’t take long to gain a foothold in Colorado golf after moving from his longtime home of Reno in April.

During his first six months as a Coloradan, Nelson won the senior division of the Charlie Coe Invitational at Castle Pines Golf Club (with Chip Lutz), and claimed individual titles in the Denver Senior Men’s Amateur and the Aurora Senior Amateur.

Then in August at Gypsum Creek Golf Course, he captured his first CGA championship title by prevailing at the Super-Senior Amateur, limited to players 64 and older.

While Nelson is new to Colorado, he’s certainly not new to success on the golf course. He’s qualified for 33 USGA championships, including earning medalist honors at a U.S. Senior Amateur qualifier in Colorado Springs in 2017. He competed in the 1982 U.S. Open that Tom Watson won at Pebble Beach. In addition, Nelson was long a force in Nevada amateur golf, winning the State Match Play four times and many other state and regional tournaments.

But Nelson’s multiple victories — along with placing fourth in the CGA Senior Amateur and being a quarterfinalist in the Super-Senior Match Play — earned him the nod for the POY award, which was only given out for the fourth time since debuting in 2017. Nelson also placed third among amateurs at the CoBank Colorado Senior Open and 17th at the North & South Senior Amateur.