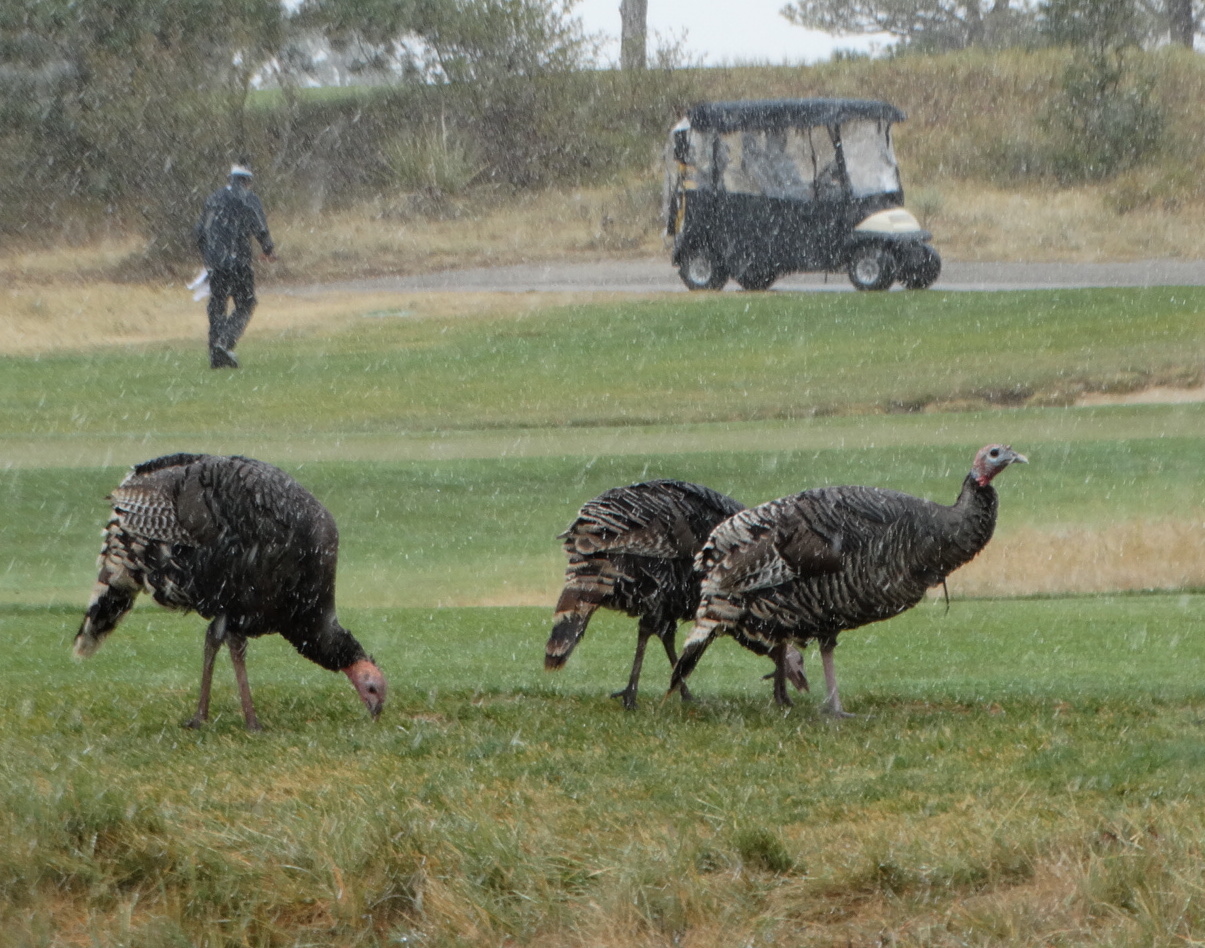 Colorado golf provides plenty of reasons to be thankful

The week of Thanksgiving presents a natural time to contemplate all the things for which we should be appreciative.

And for those of us in Colorado, this time of year marks the end of the golf season. That seems ideal for reflecting on why we’re grateful to be golfers in the Centennial State.

So, after scanning through the stories that have made news so far this year in Colorado golf, and just generally considering all the great things that the game gives us, it’s time for our annual look at Colorado golf-related reasons to be thankful:

— This year, I’ve had the pleasure to revisit Arrowhead Golf Club (below), Sanctuary, The Broadmoor and Perry Park, among many other courses. Taking in all the scenery at venues like these — and there are plenty of them in Colorado — never fails to provide a sense of serenity. Playing golf there is just gravy.

— Colorado golf organizations are often a proactive lot when trying to grow the game. Bringing the Youth on Course initiative to Colorado is but the latest example. YOC makes golf more affordable for youngsters, who pay no more than $5 per round at participating facilities, with the program subsidizing the initiative by giving the course a similar amount. Fifteen Colorado courses participated in the program this first season, and it’s sure to grow by leaps and bounds in coming years.

— Rarely, if ever, have so many players who grew up in Colorado been rookies at the same time on the PGA and LPGA Tours as there will be for the 2019 season. On the PGA Tour, where the wraparound season actually began this fall, there’s Wyndham Clark and Jim Knous. And on the LPGA side, there will be Jennifer Kupcho and Becca Huffer, in addition to University of Colorado golfer Robyn Choi. It should be a source of pride for the Colorado golf community.

— Following up on the above, it ought to be kept in perspective that players the caliber of Kupcho don’t come around every year — or even every decade. It’s more like once in a generation when it comes to a state like Colorado. The Westminster resident has been the No. 1-ranked women’s amateur in the world for 15 weeks this year, though she recently dropped to No. 2. She became the first American woman to win the McCormack Medal that goes to the top amateur on the globe. The Wake Forest senior captured the women’s NCAA Division I individual title in May, she led three U.S. teams to international titles this year, and she earned her LPGA card by finishing second in the final stage of Q-school. Add it all up and that’s rarefied air indeed.

— A vibrant golf business — and economy in general — is paying dividends in Colorado. For instance, a second Topgolf facility in the state — this one in Thornton — broke ground this fall and is expected to open late next year. TPC Colorado in Berthoud, the first new 18-hole championship course in Colorado in a decade, opened to the general public this year. And Green Valley Ranch Golf Club, which hosts the three CoBank Colorado Open Championships, recently announced that it will be the eighth location worldwide for the Jim McLean Golf School, which is considered one of the top golf schools/academies in the country.

— Though the aforementioned strong economy no doubt will push prices a bit higher, the fact remains that there’s a lot of good golf to be had for reasonable fees in Colorado. For people who want to — or must — keep costs down, it’s not hard to find 18-hole summer green fees of $35 or less. And that’s on decent golf courses. That’s hard to beat.

— Speaking of the Colorado PGA, its senior players should be an inspiration to 50-and-older golfers throughout the state. This year, 56-year-old Doug Rohrbaugh of Carbondale became the first player from the Section to win the Colorado PGA Player of the Year and Senior Player of the Year awards in the same year. Sherry Andonian-Smith of Centennial, also 56, was the Section’s inaugural Women’s Player of the Year after placing second 29th out of 264 players at the national Senior PGA Professional Championship. Five times in the last six years, players 50 or older have won the Colorado PGA Professional Championship, including 52-year-old Patrick Reidy this year. Senior golfers Rohrbaugh (three times) and John Ogden (once) have also claimed the title in recent years. And, for the record, the winner of the Colorado Senior PGA Professional Championship was 64-year-old Mike Zaremba.

— The CGA and CWGA joined forces at the beginning of this year after each organization had a 100-plus year run of its own. And the integration has gone nearly seamlessly from the perspective of the members — both men and women — who are served by new-look Colorado Golf Association. In addition, the CGA and the Colorado PGA often team up for the betterment of golf in the state. A good example of that is the ever-growing Junior Golf Alliance of Colorado, which just completed its third season.

— Speaking of which, it should be noted again that Joe McCleary and Juliet Miner, the presidents of the CGA and CWGA, respectively, in 2016 and ’17, selflessly agreed to serve a third year as co-presidents of the CGA in order to make the transition to one organization go smoothly. They’ll soon be stepping down from their presidential roles, but it shouldn’t be forgotten the way they’ve gone above and beyond in volunteer roles for the sake of Colorado golf.

— For Colorado golf fans who don’t get to attend major golf championships very often, the 2018 U.S. Senior Open (left) was another breath of fresh air. Not only was there great golf, but it was in a setting that’s tough to beat — The Broadmoor Resort in Colorado Springs. And it was nice to hear that the U.S. Senior Open will be returning to The Broadmoor in 2025.

— Also on the spectator tournament front, there are a couple of events to look forward to in 2019. First up is the Web.com Tour’s TPC Colorado Championship at Heron Lakes July 8-14. It’ll be just the third time the feeder circuit for the PGA Tour has held a tournament in Colorado as the Nike Colorado Classic was played at Riverdale’s Dunes Course in Brighton in 1996 and ’97. Then Colorado Golf Club in Parker will host the U.S. Mid-Amateur national championship — for players 25 and older — Sept. 14-19, with CGA-owned CommonGround Golf Course serving as the second course for the stroke-play portion of the event. The only previous time Colorado has hosted a U.S. Mid-Am was in 1983, when Cherry Hills Country Club did the honors.

— Amazingly, this year produced national champions from Colorado in two major events. Colorado State University teammates Katrina Prendergast and Ellen Secor prevailed in the U.S. Women’s Amateur Four-Ball in early May. And later that month, Kupcho became the first Coloradan to win a Women’s NCAA Division I individual title. Other Coloradans this year won regional or age-group championships — Dillon Stewart of Fort Collins (the Junior America’s Cup) and Nicholas Pevny of Aspen (the 12-13 division of the Optimist International Junior Golf Championships). Stewart recently signed a National Letter of Intent with the No. 1 men’s college program in the nation, Oklahoma State.

— Two of the most worthwhile caddie-related development programs have strong ties to Colorado, and continue to do invaluable good. One is the Solich Caddie & Leadership Academy, based at CommonGround Golf Course, Meridian Golf Club, and at Lincoln Park and Tiara Rado in Grand Junction. The other is the Evans Scholarship for caddies, which has a house at the University of Colorado. Both do wonders in developing boys and girls into productive young adults.

— Two Coloradans who passed away in 2018 left strong legacies in the Colorado golf community — and beyond — that will pay dividends far into the future: Jack Vickers, founder of Castle Pines Golf Club and The International PGA Tour event that had a 21-year run; and longtime high school golf coach George Hoos, the patriarch of a well-known golf family in Colorado.

— Especially when taken as a group, it’s hard to beat the three state open championships (left) held in Colorado for which CoBank is the title sponsor. And it goes beyond the large purses — $250,000 for the CoBank Colorado Open and $150,000 for the CoBank Colorado Women’s Open. I interview many competitors during the Opens, and it’s remarkable how many of them comment on how professionally the tournaments are run — sometimes even comparing them favorably with events conducted by major tours.

— The Colorado Golf Hall of Fame continues to do yeoman’s work in recognizing and preserving the history of golf in Colorado. Its museum is based at the Riverdale Golf Courses in Brighton. It’s next inductee will be longtime Coloradan Lauren Howe, who was among the best young female golfers in the nation through much of the 1970s and ’80s.

— Also on the Hall of Fame front, Colorado continues to be fortunate to call World Golf Hall of Famer Hale Irwin one of its own. Irwin, who grew up in Boulder and attended the University of Colorado, continues to give back to the state in many ways. He lends his name to the AJGA Hale Irwin Colorado Junior tournament and to the Hale Irwin Player Program, and in recent months he’s helped out in various roles as Colorado hosted the U.S. Senior Open, and as a design advisor for Denver’s historic City Park Golf Course, which is being redesigned.

— And last but far from least, we should be thankful for the many volunteers that make golf what it is in Colorado. They help lead many of the major golf organizations in the state, officiate at tournaments, rate courses, play many roles when major championships comes to Colorado, and on and on. The game would be a shell of itself without them.

All told, it’s quite a Thanksgiving smorgasbord on which Colorado golfers can feast.