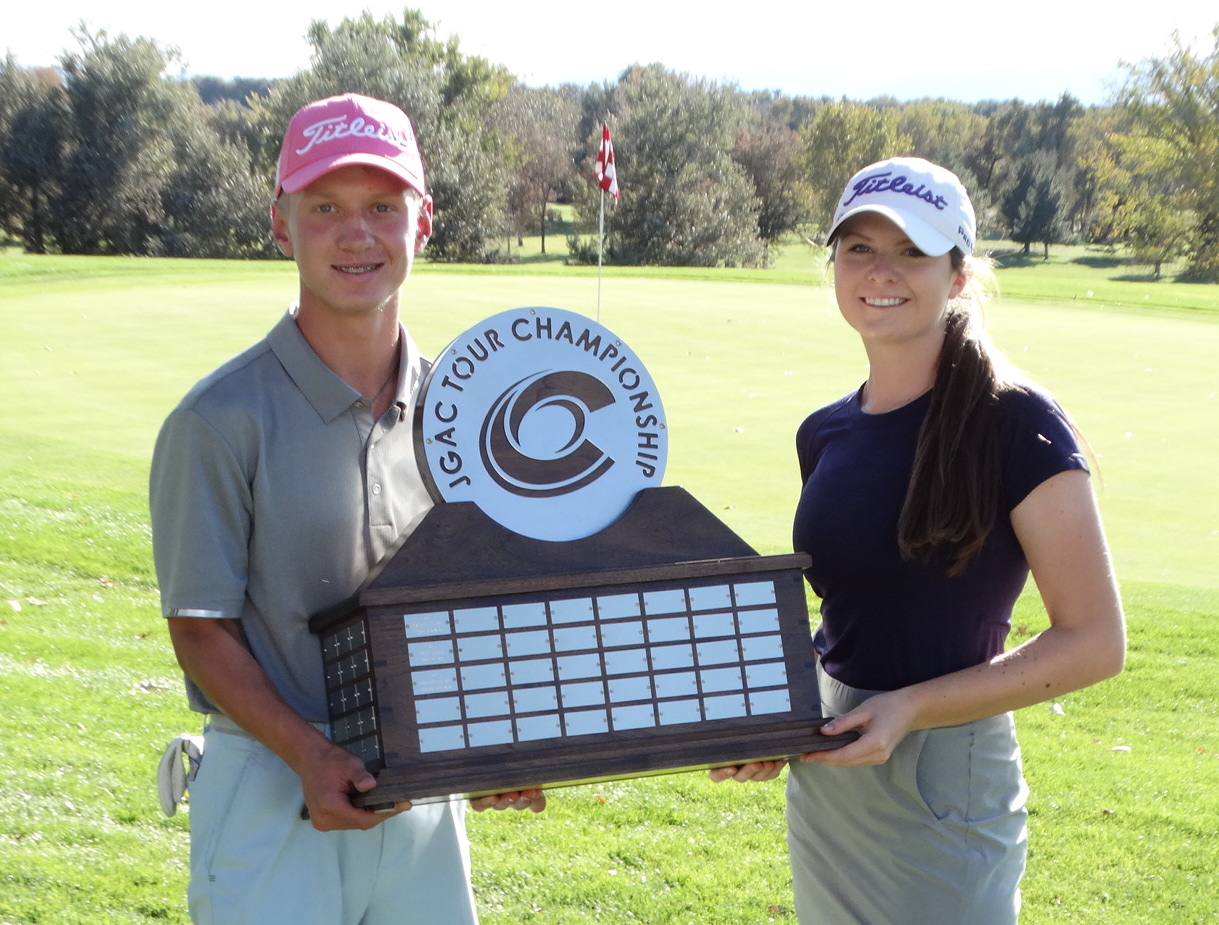 As if completing a personal trifecta in the Junior Golf Alliance of Colorado’s Tour Championship weren’t enough for Charlotte Hillary on Sunday, the 17-year-old accomplished the feat at her home course, Cherry Hills Country Club. And, to take it yet another step, with the victory the Kent Denver senior earned the Girls Player of the Year award from the JGAC.

That’s what you call finishing the Colorado golf season in style.

Hillary won the JGAC Tour Championship each of the previous two times she played in the event — in 2016 at Cherry Hills and last year at Denver Country Club. And this time she left little suspense in claiming the title by 10 strokes.

“That was one of my goals this year,” Hillary said of her personal three-peat in the Tour Championship. “I’m really happy to have done it. To have won it three years is not something a lot of people can say.

“This is my last time playing in it, which is pretty sad, because next year I’ll be in college. But just to look back and have my name on the trophy three times is really special. I’m definitely excited about that.”

Joining Hillary as a Tour Championship winner on Sunday was 14-year-old JGAC member Parker Paxton of Riverton, Wyo., who pulled away down the stretch to claim the boys championship by three over two-time 4A state high school champion Micah Stangebye of Montrose.

“It feels pretty awesome” to win the Tour Championship, said Paxton, an eighth grader at Riverton Middle School. “I’m very thankful Colorado let me into this event. And Cherry Hills was just an amazing golf course. It’s pretty special. I kind of fell in love with the course while I was out there. It’s perfectly manicured, awesome. It means a lot to win this one.”

(The Tour Championship winners are pictured at top.)

And while the Northwestern University-bound Hillary earned Girls Players of the Year honors from the JGAC, Dillon Stewart of Fort Collins landed the Boys POY for the second straight year after winning the first two majors of the year — the Colorado Junior PGA and the Colorado Junior Amateur. Stewart did not play in the JGAC Tour Championship this weekend as he’s a freshman on the Oklahoma State golf team.

Hillary, whose family has been members at Cherry Hills since 2003, birdied the last two holes — including a 25-footer on 18 — on Sunday to shoot a 3-over-par 75, giving her a winning total of 3-over 147. On day 2, she made three birdies, four bogeys and a double bogey.

Kaylee Chen of Greenwood Village, the Colorado Junior Amateur champion and a U.S. Girls’ Junior qualifier this year, placed second on Sunday among the girls at 157 (78-79). Aubri Braecklein of Northglenn took third at 158 (79-79).

On the boys side, Paxton and Gavin Hagstrom of Fort Collins were neck and neck atop the leaderboard most of Sunday. Hagstrom, a senior at Fossil Ridge High School, was one ahead after a birdie on 11. But he bogeyed 12, and Paxton took the lead for good with a 12-foot birdie on No. 15. After both players bogeyed 16, Hagstrom fell back with a double-bogey 7 on No. 17 and Paxton closed with a birdie on 18.

Paxton ended up with a 1-under-par 71 on Sunday, giving him a winning total of 3-under 141 in his first days ever playing Cherry Hills. He carded four birdies — including a 60-footer on No. 8 — and three bogeys on Sunday.

Five days after winning his second straight 4A individual title, Stangebye placed second at 144 after a pair of 72s. Hagstrom, who finished third in the 5A state high school meet on Tuesday, ended up third on Sunday at 145 after a second-round 77.

“I beat some great players this weekend,” said Paxton, whose older brother Easton plays college golf for North Carolina State. “There were 10-15 players who could legitimately come here and win. To be the one who played the best and came away with the ‘W’ is pretty special.

“This might be my biggest accomplishment yet. It’s definitely the biggest win and one of the strongest fields I’ve ever played in.”

Meanwhile, it’s been quite a week for Hillary. Besides winning the tournament on Sunday and earning JGAC Girls Player of the Year honors in front of family and friends — “the more the merrier for me at this point,” she said — earlier this week she was named the 2019 Girls Future Famer by the Colorado Golf Hall of Fame. And on the same day, she was notified she’s going to receive the prestigious AJGA Jerry Cole Sportsmanship Award later this fall in Florida, where she’ll give a speech for the occasion.

In part, Hillary earned the sportsmanship honor for raising $40,000 — $20,000 for The First Tee and $20,000 more for AJGA ACE Grants. Hillary also was named First Tee Volunteer of the Year by the Colorado Open Golf Foundation board for the same reason. Likewise because of her fundraising for good causes, Hillary will get to play golf with Rickie Fowler in Florida prior to the AJGA Rolex Tournament of Champions, where Hillary will compete in late November in Palm Beach Gardens, Fla.

On the course in 2019, Hillary won her first AJGA title last month in Montana. Earlier this month, she teamed up with Hailey Schalk to qualify for the U.S. Women’s Amateur Four-Ball for the second time. In addition, Hillary recorded one of the best individual finishes ever by a Coloradan in the Girls Junior Americas Cup by placing third. She was also second in the 3A girls state high school tournament, third in the CGA Women’s Stroke Play, third in the AJGA Hale Irwin Colorado Junior, and 29th in the Girls Junior PGA Championship.

As for landing the Girls Player of the Year honor from the JGAC for the first time, Hillary said, “It’s something I’ve really been working hard for the last couple of years and I’m a senior so I’ll never have that opportunity again. It feels good to be up with my friends who have won it before, and to get recognition for my summer and fall (of good play) is really special.”

As for Stewart, in 2019 he won the final two JGAC majors in which he competed — the Colorado Junior PGA by eight strokes and the Colorado Junior Amateur by four. The 2018 boys Junior America’s Cup individual champion also represented Colorado in the 2019 JAC. He also tied for qualifying medalist honors for the U.S. Junior Amateur for the second straight year and qualified for the national Boys Junior PGA Championship.

And now, Stewart is playing college golf for the perennial powerhouse that is Oklahoma State.

“I’m truly honored to accept this award again this year,” Stewart said in a video clip. “It means a lot, and that hard work does pay off.

“The opportunity you have that the Junior Golf Alliance provides for you — these tournaments — is something that you’ll never forget. I think it’s the greatest thing I’ve ever done is play golf. It takes me places I never thought I would go.”

For scores from the JGAC Tour Championship, click on the following: BOYS, GIRLS.