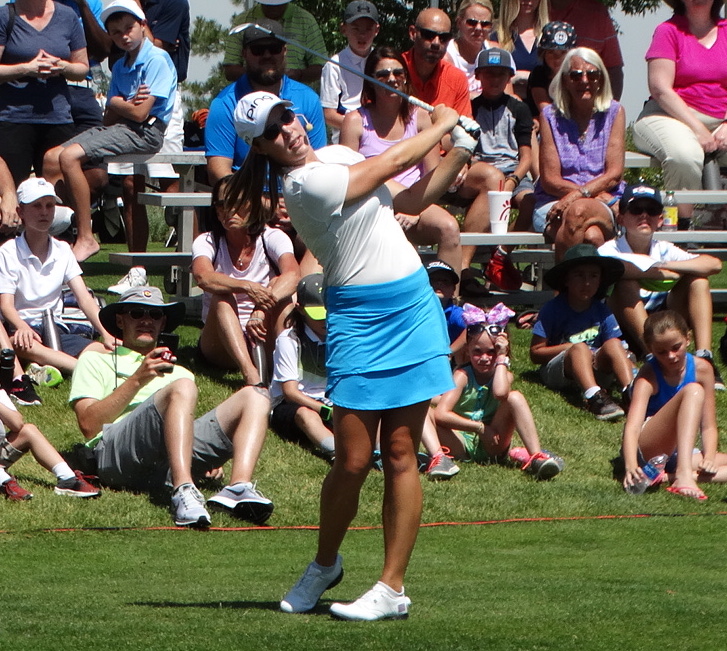 Since mid-July, Jennifer Kupcho has been just OK regarding making cuts and ensuring herself paydays in LPGA Tour events. The Westminster resident has played a dozen tournaments in that span and made checks at six of them.

But what she’s been consistently good at during that stretch is being a weekend warrior when she does qualify for the final rounds. In the 12 weekend rounds she’s played during that time, she’s matched or bettered par 11 times.

And in her last dozen weekend rounds, she’s a cumulative 22 under par.

The latest example came Sunday in Chinese Taipei where the rookie pro went 69-70 on the weekend — 5 under par — to tie for 35th place in the Taiwan Swinging Skirts LPGA. The showing helped give Kupcho some cushion in her quest to qualify for the lucrative season-ending CME Group Tour Championship, set for Nov. 21-24 in Naples, Fla.

Making the field for the Tour Championship would be significant for Kupcho (pictured) as the tournament will feature a $5 million purse, with $1.5 million going to the winner, which makes it the largest first-place prize in the history of women’s golf.

Kupcho started the Asian swing outside the top 60 — in 64th place. For the complete standings, CLICK HERE.

In Chinese Taipei, the former top-ranked amateur in the world went 75-70-69-70 for a 4-under-par 284 total, which left her 14 strokes behind champion Nelly Korda. Over the final three rounds of the tournament, Kupcho made 14 birdies.

Sunday’s $13,340 payday gives Kupcho $432,791 for the LPGA season, which didn’t begin in her case until late May as she deferred taking tour membership until after completing her college career at Wake Forest. She stands 43rd on the 2019 LPGA money list.

After top two-five finishes in July, including a second place at the LPGA major at the Evian Championship, Kupcho missed the cut in five of her next six events before placing 27th, 33rd and 35th in her first three events in Asia.

Kupcho, winner of the 2019 Augusta National Women’s Amateur, and Colorado Sports Hall of Famer Dale Douglass will be the first recipients of the Hale Irwin Medal during a dinner at The Broadmoor in Colorado Springs on Nov. 23. The medal recognizes outstanding Colorado golfers who “exhibit competitiveness, resiliency and a proven record of winning.” Should she qualify for the CME Group Tour Championship, Kupcho won’t be able to attend the Hale Irwin Dinner in person given the conflict of dates.

Five months after a quadruple-bogey 9 on the final hole of regulation led Yealimi Noh to finish runner-up in the CoBank Colorado Women’s Open, the 18-year-old Concord, Calif., resident earned her 2020 LPGA Tour card on Saturday.

Noh, 17 at the time, had a three-stroke lead going into the final hole of the CWO on May 31, but lost in a playoff to Coloradan Becca Huffer after her disastrous 9.

But Noh finished third on Saturday following the eighth and final round of LPGA Q-Series in Pinehurst, N.C., where the top 45 landed 2020 LPGA Tour cards.