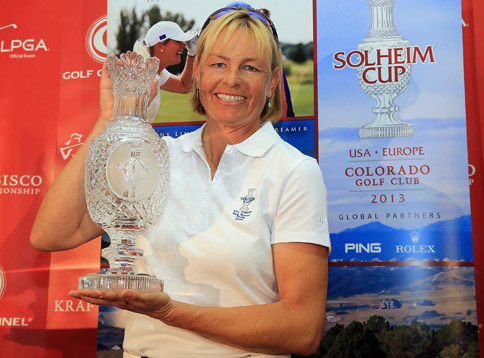 Liselotte Neumann captained the Europeans to victory in the 2013 Solheim Cup at Colorado Golf Club.

Today (June 1) is Women’s Golf Day, so it’s fitting that arguably the most prestigious women’s golf tournament of 2021 in Colorado — the CoBank Colorado Women’s Open — is likewise taking place this week.

But, for those paying close attention, you might notice that many of the big-time names who played in the 2020 Colorado Women’s Open are competing in another Women’s Open this week. That would be the biggest event in women’s golf, the U.S. Women’s Open, which starts Thursday at Olympic Club in San Francisco.

That shows what a unique year 2020 was for the Colorado Women’s Open as it attracted very possibly its best field ever in large part because the LPGA and Symetra Tour events were shut down for the entire spring and early summer of last year due to Covid-19 safety concerns. That left top players who were eager to compete with the option of doing so at the CWO, which features a $50,000 first prize.

With this week’s scheduling conflict with the U.S. Women’s Open, things are much different — though the Symetra Tour doesn’t have an event opposite the CWO, which helps.

The bottom line is that the field for the 2021 Colorado Women’s Open, which runs Wednesday through Friday at Green Valley Ranch Golf Club in northwest Denver, will look more like what it has in the few years prior to 2020. This week’s CWO will have one marquee name teeing it up along with many good up-and-coming players and quite a few of Colorado’s best female golfers.

The headliner, as ColoradoGolf.org reported early last month, is Liselotte Neumann, whose 13 career LPGA Tour victories include the 1988 U.S. Women’s Open. Neumann, also a winner of 10 Ladies European Tour events, wasthe captain of the first European team to win the Solheim Cup on U.S. soil. That victory happened to come at Colorado Golf Club in 2013.

Spectators are welcome this week, and admission and parking are free. As usual, a pro-am competition will be held in conjunction with the event, similar to the AT&T Pebble Beach National Pro-Am on the PGA Tour.

For Wednesday and Thursday tee times for the $150,000 Colorado Women’s Open, CLICK HERE.